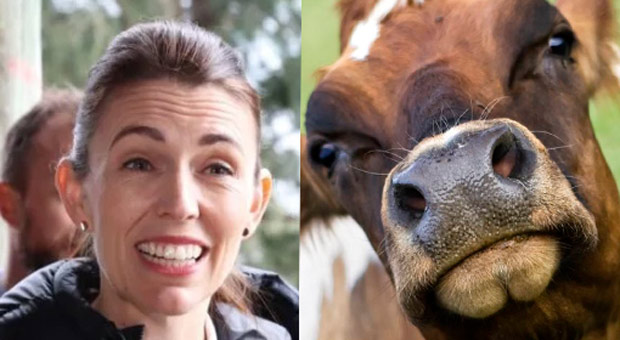 As part of a plan to reset agricultural production, the Labour administration, led by Jacinda Ardern, claimed the “farm levy” would be a world first, and farmers should be able to recoup the cost by simply charging more for their products.

Standing behind a podium of hay bales at a North Island dairy farm, Ardern and three of her ministers unveiled the government’s new plan.

“No other country in the world has yet developed a system for pricing and reducing agricultural emissions, so our farmers are set to benefit from being first movers,” Ardern said.

“Cutting emissions will help New Zealand farmers to not only be the best in the world but the best for the world.”

The plans include taxing methane emitted by livestock and nitrous oxide emitted by fertilizer-rich urine, which supposedly contributes to around half of New Zealand’s overall emissions output.

Unsurprisingly, farmers condemned the proposal, making it much harder for farms to function.

According to Federated Farmers, the industry’s leading lobby group, the tax would “rip the guts out of small-town New Zealand,’ affecting food production and making beef and lamb consumption a more expensive option.

He added that farmers would sell their farms “so fast you won’t even hear the dogs barking on the back of the ute (pickup truck) as they drive off.”

Beef and Lamb New Zealand also expressed concerns the Ardern government had proposed to reduce the categories of sequestration recognized.

“New Zealand sheep and beef farmers have more than 1.4 million hectares of native forest on their land which is absorbing carbon, and it’s only fair this is appropriately recognized in any framework from day one,” its chairman Andrew Morrison said.

The news comes a month after the Dutch city of Haarlem announced it would ban meat advertising due to climate change.

The Daily Fetched reported in September:

The city near Amsterdam has agreed to outlaw ads for intensively farmed meat in public places from 2024.

The city council quietly approved the move in November.

“It will be the first city in the Netherlands — and in fact Europe and indeed the world — to ban ‘bad’ meat ads in public places,” Ziggy Klazes, councillor for the GroenLinks (Green-Left) party who drafted the motion, told AFP.

Klazes said the ban would target all “cheap meat from intensive farming,” adding, “as far as I’m concerned, that includes ads from fast food chains.”

What a bunch of dumb b!tche$

What’s wrong with the kiwis? Vote that crazy lefty out!!!

How would they do this? “Come here, bossy, give us a whiff, it’s tax time…”

Why force the farmer into politics? Add a tax to ice cream so people can see the direct effect.
Cows may burp, but millions of other animals that graze are gone. 25-50 million buffalo in America. Plus dear elk and so on. All the great African herds.
The Chicken Littles of the world need to calm down.

Any tax would have the intent of starving humanity. The so called climate funds they collect, do what? exactly, other than make those pushing the panic button, WEALTHY!

For the WEF’s ” Great Reset” to work, they first need to smash economies and livelihoods. Jacinda and Labour Greens are fully signed up for this approach. Are our youth going to swallow this madness? Have they been successfully brainwashed? Do they not give a d**n about their forefathers having died protecting our sovereignty and right to express our opinions and fight for freedom? Are they prepared to be the slaves of the new elite?

Boycott Tampax Trends on Twitter After Creepy Tweet From the Brand Goes Viral
Feminine product brand Tampax began trending on Twitter yesterday after followers demanded a boycott....
No posts found
wpDiscuz
8
0
What are your thoughts? Click to commentx
()
x
| Reply