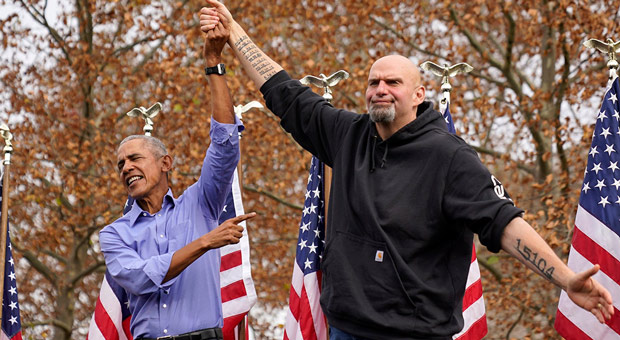 After Democrat John Fetterman managed to flip a Republican-held US Senate seat in Pennsylvania, celebrities and media outlets have been gushing over his future ‘potential’ ever since.

Given Fetterman’s condition, it’s not just stunning, but perhaps almost a miracle that Democrats managed to drag him over the finish line.

MSNBC went a step further, suggesting Fetterman could be a candidate for a 2024 presidential run.

The fact that Fetterman has trouble forming words and comprehending speech could make him a perfect presidential candidate for Democrats, just look at Joe Biden.

On Wednesday, MSNBC host Katy Tur speculated that Fetterman could run for the presidency someday.

Tur floated the viability of, “Fetterman, as a nominee at some point for president,” before noting his record for surpassing President Biden and former President Trump’s vote share in the state.

MSNBC host Andrea Mitchell praised Fetterman for making so much progress with voters.

“I spent a lot of time covering this race, and with Pennsylvania politics, going back some decades, and I started my career there, but the fact that John Fetterman did, first of all, so much better with White non-college-educated voters,’ she said.

“Better than Biden, better than Trump, so he ran ahead of both of them, but he also, you know, did fairly well in the cities and in the [unintelligible] counties.”

This story is how we KNOW the vile left intends to crater this nation. When parody is presented as a legitimate questions on mainstream media, it’s the beginning of the end.

The MSM interferes with peoples right to a free mind! Up to 50% of the public are in some way manipulated by 100% falsehoods, LIES & the creation of hatred towards a specific political party, (us), Republicans. About 35% are all in super haters who believe every bit of nonsense they put out. Those people are the real dumb ones who wouldn’t know what parody meant. The other 15% are questionable idiots, who if they can’t seek the truth that shows just how Evil the left is and how they rely on the corrupt MSM in America for their political survival, then they really aren’t any better than the 35%.
The MSM, corruption among the left, social media, big tech & government agencies, collude to interfere with elections! Not by reporting the news , but by reporting fabricated stories to their followers that incite hatred towards the GOOD GUYS.

Nothing against Fetterman, but, the idea of him running for president before the ink is dry on his medical release forms would be cruel. Not only to him, but for his family, and to the country. We need a POTUS that can think quickly, come up with rock solid solutions at a moments notice, and someone who can put a confident face on our commander in chief. Someone not like Joe.

Why not? Look at what we have for a President now. Might be an improvement.

He could be on Biden’s ticket. Two babblers for the price of one.

Why not I mean those idiots promoted Biden who is an idiot. So why wouldn’t they promote Fetterman. Competency doesn’t matter to these people only ideology

Stupid incompetence is a virtue in Democratistan.