MSNBC Declares War: All Republicans Are ‘Evil’ and a ‘Threat to Democracy’ 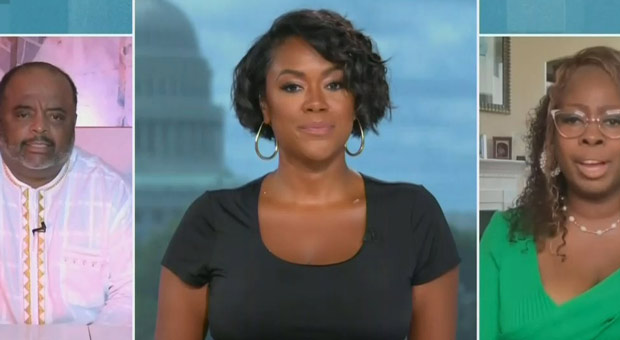 In the aftermath of Joe Biden’s declaration that half the voters in America are dangerous extremists, leftist MSNBC chimed in proclaiming that Republicans are “evil” and that “we are at war”.

MSNBC host Tiffany Cross turned the division up a notch, stating “Obviously, Republicans are, I think, the biggest threat to democracy. We don’t separate right-wing extremists and Republican Party anymore.”

Cross said she she considers “mainstream, establishment Republicans are echoing these calls for violence. All but threatening it.”

Cross went on to declare that it feels like a civil war has “already begun.”

When pundit Roland Martin declared “We are at war with these people. These folks are evil,” Cross agreed.

“They have allowed evil into their house with Donald Trump. He has now dominated the party. This evil is spreading. And when you are in a war footing, you have to respond accordingly,” Martin continued.

“When the enemy is coming at you you, can’t fall down, you can’t break down. This means war,” he added.

“You keep hitting! You keep pounding,” Martin proclaimed, further labelling conservatives as “crazed, deranged folks who want to import evil in every facet of our society.”

After Martin finished his totally not crazy or deranged rant, Cross merely stated “yeah—it’s a scary thing to think about. Really.”

Wow. These people in their bubble do not realize nor care what they may be unleashing.

MSNBC is a hate driven disaster just on the verge of going over the cliff!!!!!!

See what happens when you put unqualified minority quota hires in positions they are not equipped to handle – who were only chosen due to color of skin and not content of character like Dr. King warned you about.
Dr. Ben Carson is one of the few I’ve seen who was amply qualified and the liberals immediately vilified him as a Boot-Licking Uncle Tom Sell-Out. Is it jealousy among minority liberals of the intelligent conservative minority minds who chose not to wasted their time on pity and berating others?

It’s so nice to finally be recognized for the racist, race-hating,, hate-mongering, war-mongering extremist that I must surely be. I do vote Republican and have for a few cycles now, and disagree with most stances of the Democratic party, so I am fully qualified to be a racist, etc….. Seems to me, though, that most indicators, financial or societal, showed marked improvements for people of color when looking at jobs held, jobs available, general employment levels and a commensurate lift in general gross earnings for all sectors of society, a general mild outbreak of peace and prosperity for nearly all. Funny how just 2 years into a Democratic agenda, we are in the hole in nearly all measurable indicators.