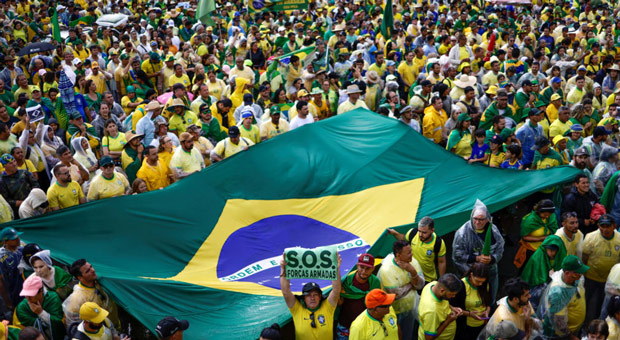 Millions of Brazilians have called for the military to step in and protect democracy after claims the election was stolen in favour of Luiz Inácio Lula da Silva who is due to be inaugurated Jan. 1.

President Jair Bolsonaro’s party leader says he will meet with protestors and” will not let them down.”

On Tuesday, the Superior Electoral Court announced Lula’s certification ceremony for president will be scheduled for 2 p.m. on Monday, December 12. The inauguration will take place on January 1, 2023.

Last month, Bolsonaro challenged the election, arguing votes from some machines should be “invalidated” in a complaint.

In November, Supreme Court justice Alexandre de Moraes said in a ruling seen by Reuters that Bolsonaro’s electoral coalition must present its full audit for both rounds of last month’s vote within 24 hours, or he would reject it.

Calheiros also floated the idea of punishing public servants who refrain from unblocking the roads.

On Tuesday, President Jair Bolsonaro met with leaders of the Liberal Party to discuss ways forward amid the growing protests from millions of Brazilians.

The head of the PL, Valdemar Costa Neto said Bolsonaro is looking forward to “talking to these people who are on the street, people he loves, and who love Bolsonaro,” said the PL head.

“More than 80% of judges in Brazil, at first and second instances, do not agree with what the Federal Supreme Court is doing,” said the former judge.

“Justice Alexandre de Moraes has not respected the Constitution for a long time. He has been committing crimes for a long time, and the Federal Constitution says that arrest can only occur by written order of a judicial authority, that is, of a judge, or in flagrante delicto,” Coelho said.

“The crimes committed by Alexandre de Moraes are being committed with his decisions. By the time his decisions are in effect, crime is happening. Therefore, he is in a state of flagrante delicto.”

“We are in Day 29 of mass protest in Brazil, a democratic country, with free elections, and we’re talking not tens of thousands or hundreds of thousands, but millions (of protestors) And what looks to be, when all is said and done, will be tens of millions,” investigative journalist Matthew Tyrmand told Tucker Carlson on Monday. “This is possibly the largest democratic protest in human history, and the global media is crickets on this. It is being memory-holed in real-time.”

“They do not want to be led by convicted criminal. Lula da Silva was convicted in three separate courts, on 12 charges, by 19 judges, unanimously. Not Bolsonaro appointees, this was years before Bolsonaro. His judicial appointees in the Supreme Court freed him in the last two years, just so he could run in this race. They annulled and vacated his multiple sentences, a 12-year sentence. 580 days he served. They let him out to run. And Brazil has a law on the books that says no convicted felon can be elected to office. They absolutely put him on the chessboard so they could attempt to control the outcome. Now the people, en masse, are crying foul,” Tyrmand added.

Even in the districts where Lula da Silva “supposedly has a stronghold, say, the Amazon, with indigenous peoples – they’re marching on Brasilia. Every city in the country is filled with protestors. Now the question is, what is to be done when you have a judiciary that is not comprised of impartial, non-partisan judges, but political appointees who are working to skew an electoral outcome,” Tyrmand continued.

Tyrmand said the military has “a special role in the Brazilian constitution, Article 142.”

“They are the ones to adjudicate separation-of-power disputes. And it looks like this will be coming to a head,” he said.

More than 221 military personnel, including 46 flag officers, criticized the Supreme Court, asking commanders of the Armed Forces to take a position on the demonstrator’s demands.