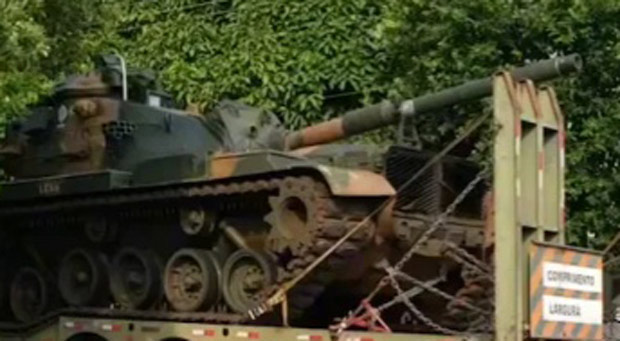 Following Brazilian President Bolsonaro’s meeting with military leaders at a ceremony to promote new generals on Thursday, Military vehicles were spotted in the area as Brazil observer Matt Tyrmand claimed: “martial law is coming next week.”

The news comes after Elon Musk said Twitter may have interfered with Brazilian elections.

“I have sources on the ground saying that the reservists are being activated right now, starting yesterday in smaller and mid-size cities,” journalist Matthew Tyrmand told Steve Bannon on Dec. 2 on his “War Room” podcast.

“You can already see videos of tanks being transported to strategic points and chokeholds around the country. I think by next Wednesday or Thursday, (the Generals) are going to put a letter in front of Bolsonaro and say, sign this and activate us. We believe we have to act right now, according to the constitution and go after these (voting) machines, arrest these judges, and then the house of cards will fall,” Tyrmand said.

On Tuesday, President Jair Bolsonaro met with leaders of the Liberal Party to discuss ways forward amid the growing protests from millions of Brazilians.

The head of the PL, Valdemar Costa Neto said Bolsonaro is looking forward to “talking to these people who are on the street, people he loves, and who love Bolsonaro,” said the PL head.

Lula wants to invite Venezuelan dictator Nicolás Maduro to his inauguration, but Bolsonaro issued a regulation preventing the leader from entering the country.

Wouldn’t that be great if the US military took over,arrested the Biden crime family and restored order in this country? nothingshort of that will ever end the corruption. Isn’t that right Hunter and The BIG GUY?

Trumpie had his chance but dropped the ball big time. Bolsonoro has what Trumpie lacks, a will to never give up.

As far as I know and I believe history will back me up, the military Always takes the side of the commies!

What people don’t understand, is that the military literally IS communism.
That’s what I tell my libtarded associates every time they want to blather on about the virtues of un-tried socialism in our society. I tell them, you want socialized medicine? Go join the military where if a military doctor maims or cripples you or one of your dependents,
You. Can’t. Sue.

Something Trump could have learned from.