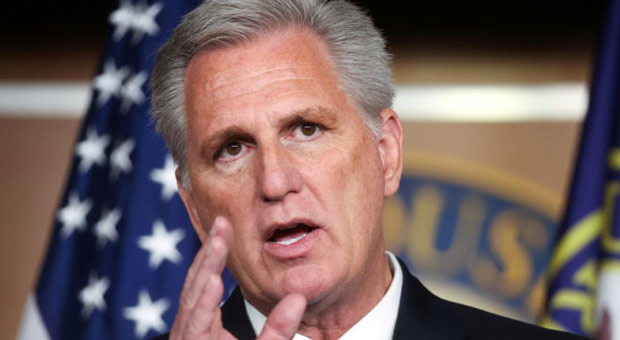 Democrats were able to play an outsize role under the previously Democrat controlled House, particularly in attacks against former President Donald Trump.

“What I am doing with the Intel Committee [is] bringing it back to the jurisdiction it’s supposed to do,” McCarthy said.

“Forward-looking to keep this country safe, keep the politics out of it,” the California Republican told the media Thursday, the Hill reported.

“So yes, I’m doing exactly what we’re supposed to do.”

Meanwhile, Schiff tried to claim the “real threat” was from right-wing militia groups; here is some of his whining:

Republicans have been calling for Swalwell to be removed from the House Intelligence Committee due to his role in investigating Trump’s alleged ties to Russia and his relationship with a suspected Chinese spy.

READ MORE: Trump Calls for Adam Schiff to Be PROSECUTED for “The Damage He’s Done to Our Country”

“If you got the briefing I got from the FBI, you wouldn’t have Swalwell on any committee,” the speaker said.

As The Daily Fetched reported on Thursday, Democrats claimed Republicans will use the panel to attempt to shut down ongoing investigations into their own “wrongdoings.”

Rep. Dan Goldman of New York claimed the panel’s purpose is “to interfere with the special council’s ongoing investigation into the conspiracy to overturn the 2020 election.”

Schiff said the panel is intended to “undermine the legitimate investigation of President Trump’s incitement of a violent attack” on the Capitol.

The Select Committee was part of the deal that hardline conservatives in Congress struck with Kevin McCarthy in exchange for voting for him, according to Axios.

He is without a doubt the most sickening lying individual since the start of the Republic.
He should be jailed for the number of lies he has told.

Smarter than you
Reply to  Rob Roy

LIBERALS ARE SATANIC
Reply to  Smarter than you

And you are a kool aid drinking groomer!

edward patrick o'neill
Reply to  Smarter than you

Rob Roy was a Scottish hero, you’re a F ZERO!!