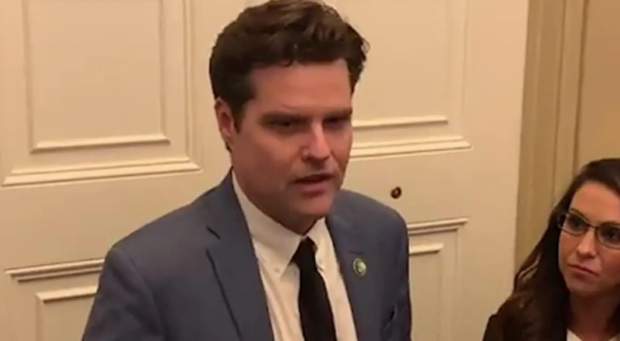 Rep. Matt Gaetz (R-FL) has promised to resign if Democrats strike a deal for a “moderate” Republican to become Speaker.

The Florida congressman and fellow defectors have stood firm against Rep. Kevin McCarthy’s speakership bid and continue to pursue someone who isn’t a RINO.

“These 212 Democrats are going to vote for Hakeem Jeffries every single time. He’s a historic candidate. They’re not going to leave off,” Gaetz told Fox News’s Laura Ingraham on Thursday.

“If Democrats join up to elect a moderate Republican, I will resign,” Gaetz continued.

Gaetz called McCarthy a “squatter” and has voted against him in each of the 11 ballots so far.

The Florida Republican added that McCarthy would earn his vote no matter how many concessions there were.

“He’s the masthead of the lobbying core. I resent to which Kevin McCarthy utilizes the lobbyists and the special interests to be able to dictate how political decisions are made,” Gaetz said.

“If Kevin McCarthy got out of this race, Jim Jordan would get into it,” Gaetz said.

“And I believe he would win and invigorate our movement. He’s broadly trusted in every corner of the Republican Party and with a lot of our donors and supporters, and activists. That’s the type of option if McCarthy bows out,” he said.

Gaetz also warned McCarthy will “have to live the entirety of his speakership in a straitjacket constructed by the rules that we’re working on now” if he does become Speaker of the House.

none of you p***y republicans have the b***s to do what needs to be done and when we tell you we will vote for Trump, you mock us and try to keep the gravy train rolling for you and the a*****e demoncrats. I don’t trust any of you anymore. Try a piano wire necktie.

Do us ALL a favor and resign NOW. Your “show” has done more harm to the GOP and what we could have accomplished than anything else.