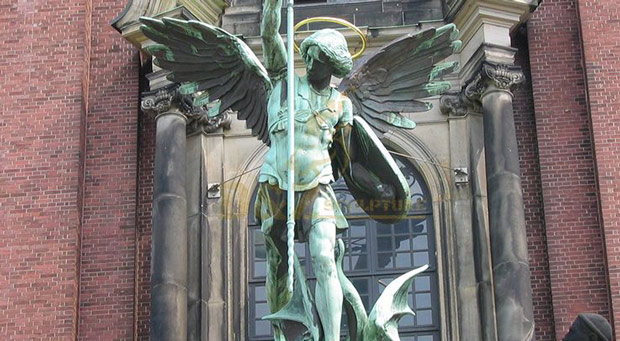 A drunken man who tried to steal a statue of Archangel Michael from the Rey Parish in Monterrey, Mexico, ended up impaling himself on the angel’s sword.

The Catholic News Agency reported that the man smashed through the church’s glass door on Saturday morning before trying to make off with the angel statue.

However, the would-be thief tripped and fell on the angel’s sword, sustaining severe injuries to his neck.

A passerby called for paramedics after seeing the man in distress.

After medical aid was rendered, local police escorted the man to the hospital.

According to the local newspaper Milenio, the man has broken into the church looking for valuables, but he stumbled and fell on the statue, landing on the sword, due to blurred vision from being drunk. The sword reportedly went into the man’s neck.

Later, a passerby who saw the man clutching his neck with blood on his hands called paramedics, but he refused to be taken to the hospital before being escorted away by police.

ABC Noticias reported the man smashed through the glass door while trying to escape the church after being wounded by the angel’s sword.

A local resident described the incident as “a matter of divine justice.”

“That happened to him for doing bad things,” said Lupita, the owner of a store that sells religious items across from the church.

“Saint Michael is for protection, to combat evil, I think that’s why that happened to him.”

“He is the great protector. He is included in the articles that we sell here, and he is a protector of homes, and that is why people say that maybe that is why he saved the Parish,” she added.

Residents said the church had been a target for similar incidents in recent years.

In October, a man stole a statue of an altar boy and the alms tray from the church; he was later arrested.

Catholic News Agency reported that the robber would likely be charged with the burglary and for damages to the church after he recovers from his injuries.

Saint Michael, or Archangel Michael, is Archangel in Judaism, Christianity, Islam, and the Baha’i faith. His the general of God’s heavenly army and is mentioned in both the Epistle of Jude and the book of Revelation 12:7–12,[11] where he does battle with Satan.

READ MORE: Almost Half of Americans Believe Humanity Is Living in End Times