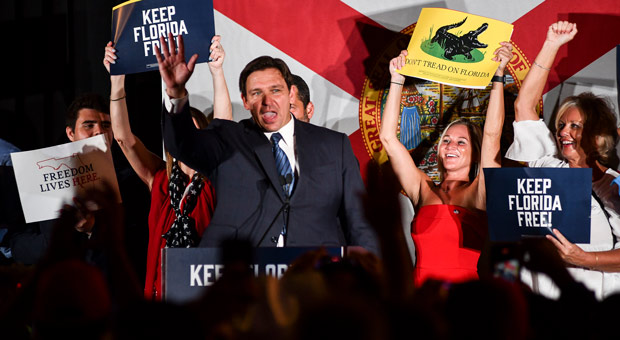 While primary elections occurred in the sunshine state, New York, and Oklahoma, Florida has general elections for school boards, meaning the winners will be the official members of the boards.

Many winning candidates have been endorsed by the 1776 Project PAC, a major part of flipping school boards from liberal to conservative across the U.S.

“It shows the desire of parents and residents across the country for some normalcy in our education system, and that means pushing against transgender ideology, critical race theory, critical gender ideology, and equity which destroys merit in education.”

“The 1776 Project PAC hopes to take these successes across the country,” he said.

The Sarasota County School Board flipped from a 3-2 leftist majority to a 4-1 conservative majority.

All were endorsed by the 1776 Project PAC and Gov. DeSantis.

The School Board in Clay Country now has a 3-2 conservative majority after three conservative candidates won their elections.

Erin Skipper, Michele Hanson, and Ashley Gilhousen won their seats, all of whom were endorsed by the 1776 Project PAC.

Perez’s daughter was called a male name and pronouns before attempting suicide in her school’s restroom.

The Miami-Dade School Board was flipped conservative Tuesday as well, making it the largest school district in the country with a conservative-majority board.

Roberto Alonso and Monica Colucci won their elections, both of whom were endorsed by the 1776 Project PAC and Gov. DeSantis.

Christina Li Roberts, Jennifer Russell, and Amy Pritchett will now sit on the board.

As we reported earlier, DeSantis has made school board races in Florida his priority:

The conservative movement recognizes such races as “ground zero” for the dawn of the “red wave.”

COVID-19 pushed parental rights into the spotlight following months of school closures and mask mandates at the hands of radical far-left school board members who looked to push woke ideology via Critical Race Theory into virtual classrooms.

The Florida Governor took action to prioritize in-person learning while rooting out toxic ideologies like CRT.

“Florida has led with purpose and conviction that our school system is about education, not indoctrination,” DeSantis said in a statement.

“Our education agenda is focused on protecting parental rights, curriculum transparency, and keeping classrooms free of woke ideology. Across our state, Floridians are ready for local school boards who promote education, not indoctrination,” he continued.