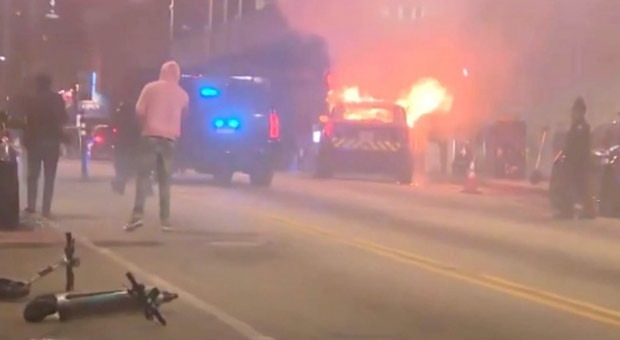 As riots erupted across Atlanta over the killing of gunman Manuel Esteban Paez Teran, also known as “Tortuguita,” in Antifa’s ‘autonomous zone,’ the media was initially touting it as a “largely peaceful protest.”

However, during a FOX 5 report, journalist Tyler Fingert said the riot was largely peaceful during live coverage.

“So it was a largely peaceful protest where they just wanted what they’re calling justice for to two for Tortuguita,” he said.

“And right now, you’ll see; basically, they want justice for him after the shooting that happened, when the Atlanta police and the different law enforcement agencies were raiding the forest…” he added.

But what happens in the background completely falsifies the claims of a “peaceful protest.”

As CNN reported, Police arrested six people and were continuing to investigate whether there were any others involved in illegal activity, the chief said. Three businesses sustained damage to their windows, he added.

Some of the people arrested Saturday have “already been involved in other criminal activity and are involved in a manner to deter the building of the public safety training center,” Schierbaum said.

“My message is simple to those who seek to continue this type of criminal behavior,” Atlanta Mayor Andre Dickens said during the news conference. “We will find you, and we will arrest you and you will be held accountable.” Dickens was among the city council members who voted in favor of the training center in 2021.

ANTIFA is Democrooks militant wing, plain and simple! There purpose is division and intimidation. Very few are actually tough though.

LOL! Democrats love Newspeak. Up is down, black is white, violence is peace, and ANTIFA are good guys!