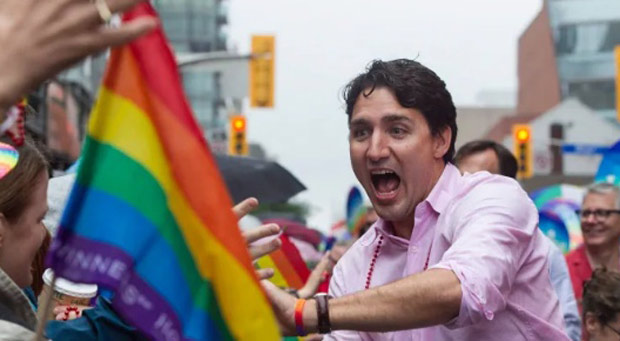 Prime Minister Justin Trudeau appeared on the Canadian spin-off of RuPaul’s Drag Race, where he preached about diversity to an adorning audience.

The liberal Prime Minister told the drag queens it had been “an incredible pleasure to be part of fighting the good fight on the right side.”

Trudeau was congratulated on becoming the first Canadian leader to participate in a Pride parade and being “such an ally.”

“Can we move beyond ‘tolerate’ and start embracing, and loving, and accepting, and learning from, and being challenged by, that’s how you build a resilient society, that’s what we’re trying to do in Canada, and we’ve got a lot of work still to do,” Trudeau said incoherently.

In response to a question about increasing racial diversity in “the Great White North,” Trudeau said that “we do diversity better than just about any other place in the world; it doesn’t matter what you’re background is, where you’re from, who you love, you enrich this place.”

One cast member remarked, “I have full-body goosebumps,” as Trudeau left the set amid sexually-charged cries of “hate to see you leave, love to watch you walk away, baby!”

“I love him so much because people like him made it easy for immigrants to migrate here and have a chance for a better life, so like, seeing him, being here, it’s actually, like, such, like, it’s so nice,” added another cast member, tearfully.

In 2015, Trudeau declared Canada was now a place where there is “no core identity, no mainstream… Those qualities are what make us the first post-national state.”

Trudeau’s appearance on the drag show comes on the heels of the leader defending invoking emergency powers to end anti-government protests that paralyzed the capital earlier this year, as Reuters reported.

Trudeau portrayed the move to use emergency powers as unavoidable, saying it was not possible to negotiate with the protesters.

“It wasn’t that they just wanted to be heard. They wanted to be obeyed,” Trudeau told the independent public commission looking into the government’s use of the powers.

“I am absolutely, absolutely serene and confident that I made the right choice in agreeing with the invocation.”