Jim Jordan: ‘You Can’t Have a Political DOJ and Also Have a Free Society’ 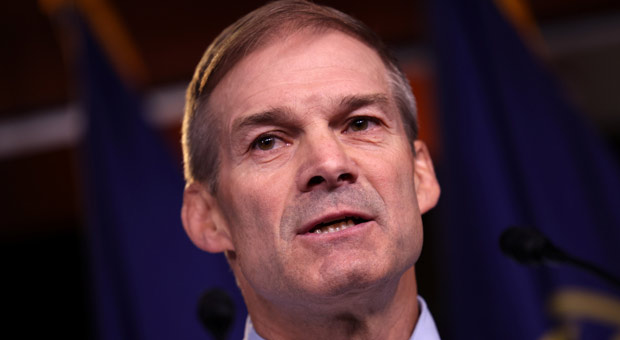 Rep. Jim Jordan (R-OH) pledged Republicans would investigate the Department of Justice if they gain control of Congress in next week’s elections.

During an appearance on FNC’s “The Story” on Monday, Jordan said he is concerned about how the politicized Justice Department threatens a free country.

“By far the most important is the Justice Department that’s now political,” Jordan said.

“You cannot have a political Justice Department and also have a free society, a free country.”

“So that is the most important thing. And we’re going to dig into this, Martha,’ he added.

“We have had, and I’ve said this many times. We’ve had now over 14 FBI agents come to us asking for whistleblower status, talking about how political that place is,” Jordan said.

“That has to change because if you have a political Justice Department – if you don’t have equal treatment under the law, every single liberty we enjoy as Americans is in jeopardy,” he continued.

“You think about the five fundamental rights we have under the First Amendment, your right to practice your faith, your right to assemble, right to petition, freedom of the press, freedom of speech, they’re all in jeopardy if the Justice Department doesn’t treat people equally under the law,” he said.

“And right now, that is not happening as evidenced by the fact 14 FBI agents have come to us seeking a whistleblower status and talking about how political things are there.”

The Hill recently reported that Jim Jordan is poised to serve as the top Biden foe in a potential GOP House.

A Republican takeover of the House next year would instantly shift the lower chamber from a force allied with President Biden to perhaps his fiercest collective adversary — one with real power to disrupt the second half of the president’s first term.

But nowhere is that shift expected to be more pronounced than the Judiciary Committee, where Rep. Jim Jordan (R-Ohio) — a conservative firebrand and staunch supporter of former President Trump — is poised to take the gavel.

Jordan, a founder and former head of the far-right House Freedom Caucus, has already made clear his intent to use the panel to launch what would certainly be some of the most high-profile — and politically significant — investigations next year into the operations of both the White House and the broader administration.

You got it right now they are just the lib stasi.