Janet Yellen Signals End of Oil and Gas: We’ll ‘Depend on Wind and Sun’ 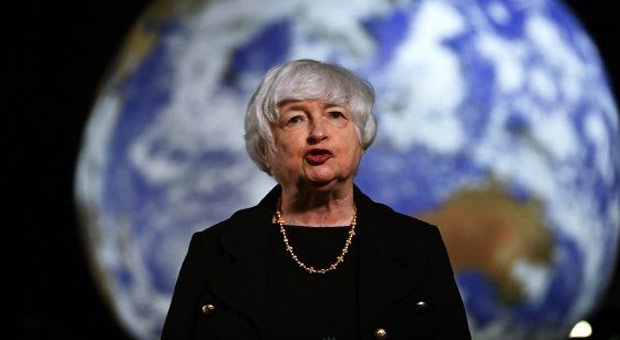 U.S. Treasury Secretary Janet Yellen said that in the future, the United States would soon rely on “the wind, sun, and other clean sources of energy” – not oil and gas.

Yellen cited the Democrats’ Inflation Reduction Act in her remarks during her visit trip to Detroit, Michigan.

“Our plan — powered by the Inflation Reduction Act — represents the largest investment in fighting climate change in our country’s history,” Yellen told the crowd.

“It will put us well on our way toward a future where we depend on the wind, sun, and other clean sources of energy.”

“We will rid ourselves from our current dependence on fossil fuels and the whims of autocrats like [Russian President Vladimir] Putin,” Yellen added.

Janet Yellen also claimed that the United States “experienced one of the quickest economic recoveries in modern history” under President Joe Biden.

As the Biden administration continues their push for the end to the oil and gas industry, officials in states like California are begging residents to reduce electricity use due to fear of blackouts.

READ MORE:  World Economic Forum: All Humans Will Soon Work in the Metaverse

As The Daily Fetched reported last week, officials resorted to begging residents to use less electricity as rolling blackouts loom:

As the state faces a seventh consecutive “Flex Alert,” where residents will be asked to conserve electricity between 4:00 p.m. and 9:00 p.m., officials say the move will be ineffective unless it’s doubled or tripled.

Meanwhile, an “Energy Emergency Alert” at level was declared by the California Independent System Operator (ISO) on Monday, one level below the stage at which blackouts would be required.

Four natural gas plants were brought online to help with demand, as wind and solar power fail to meet the state’s needs.

Granholm said the Biden administration has been demanding the oil industry increase production, while Democrats’ policies prevent them from doing so.

The new guidance from the Treasury, the largest shareholder in major development banks, including the World Bank Group and the African Development Bank, prioritizes financing for renewable energy options and “to only consider fossil fuels if less carbon-intensive options (are) unfeasible.

I sure hope Yellen and her Dim pals in Congress make calm days and clouds illegal. That’ll solve climate change for sure.

Where did this idiot come from? I thought she was from a previous administration. She clearly is brain dead, why are we listening to this idiotic rant?

Idiotic old bat has already proven herself incompetent in her area of “expertise.” Why should I believe anything she has to say?

she’s wrong about everything
she’ll be wrong about this too – obama is dead to america – so’s his agenda biden3.0

Where’s the guy that asked if it was time to use our guns ..