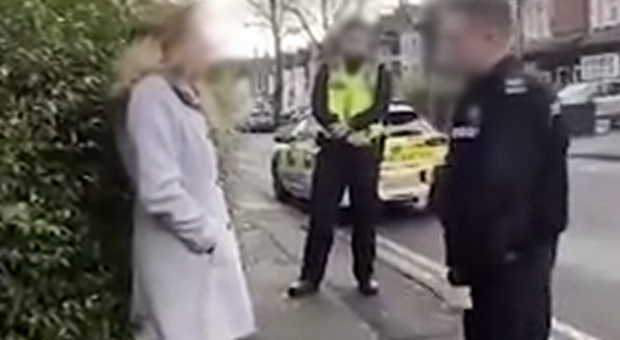 Earlier this week, a British woman made headlines after being arrested for silently praying outside an abortion center in Birmingham, UK.

Isabel Vaughan-Spruce was detained under a new protest prohibition statute after police caught her praying outside the center.

Earlier this year, authorities in Birmingham established a buffer zone around abortion clinics to deter any acts of approval or disapproval as it relates to abortion. This includes “verbal or written means” like “prayer or counseling.”

But even silent prayer, a harmless non-verbal act, is now seen as breaking the law.

Police approached Vaughan-Spruce near the BPAS Robert Clinic after an onlooker reported she might be praying outside the abortion facility.

For twenty years, Vaughn-Spruce has engaged in silent prayer outside clinics and said dozens of women who had decided to terminate their pregnancies had accepted her help and changed their minds.

“Four times, I went and stood near the closed abortion center and silently prayed there,” Vaughan-Spruce said in an interview on “Tucker Carlson Tonight.”

Authorities held and interrogated Vaughn-Spruce about her silent prayer before she was released on bail. She is scheduled to appear before authorities in February on four counts of protesting and engaging in an act intimidating service users.

Vaughan-Spruce said being arrested for “thinking” was surreal, while some of her supporters compared the incident to George Orwell and his novel, “1984.”

“In September this year, the local council in Birmingham brought in this censorship zone, this PSPO — formerly these were used for dog fouling and drunken behavior and things like that,” Vaughan-Spruce told Carlson.

“But they’re now popping up around the country surrounding abortion centers, and they banned behavior like protesting, but it also names prayer and counseling as forms of protesting.”

Self-proclaimed atheist and retiree Nadine Billingham said the PSPOs were necessary because the space around abortion clinics has become “unsafe for women,”

Billingham tweeted: “The area around abortion clinics has become very unsafe for women attending the clinics. Making these areas protected public spaces has sadly become necessary due to the violence/harassment perpetrated by a few loonies. It must include everyone, even those praying silently.”

Twitter user Hartushare jumped on board to criticize Vaughan-Spruce: “It’s so obvious she’s martyring herself in the glare of the public as a way of publicizing her beliefs, she knowingly went into that area to get arrested.”

“That in itself is very encouraging to hear,” Vaughan-Spruce told Carlson, “that it’s not necessarily about people who support abortion or don’t support abortion. This is more to do with freedom of thought here. It’s even gone further than freedom of prayer. I mean, we all talk about the cancel culture and the concerns we have about people being canceled [for] speaking in public.”

The Vaughan-Spruce incident should be ‘a line in the sand’ moment for everyone, especially people of faith.

stupid Brits, kicked your areses a couple of times and sent you home with your tails between your legs, save you from the Germans twice and all you did was turn in to a steaming pile of c**p. Should have let the Germans kick your arses