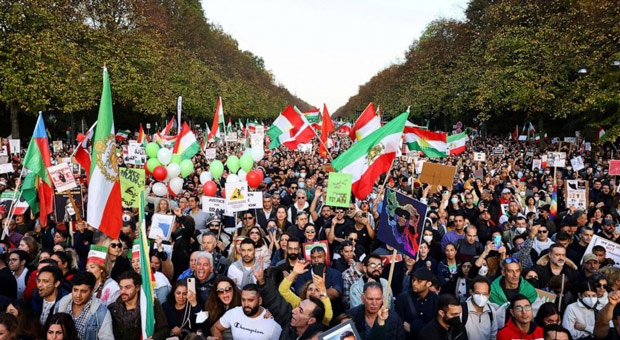 Tens of thousands of people gathered in the streets of Berlin, Washington, D.C., and Los Angeles in support of a movement challenging the Islamic Republic in Iran following the death of a woman in the custody of morality police.

Thousands of women and men gathered on the U.S. National Mall, shouting, “Be scared. Be scared. We are one in this,” demonstrators yelled before marching to the White House. “Say her name! Mahsa!”

The demonstrations of Iranians from across Washington D.C., with some traveling down from Toronto.

In Los Angeles, protesters formed a procession along blocks of a closed downtown street as they chanted for the fall of Iran’s government.

“We want freedom,” they chanted.

Participants held up Iranian flags with the tagline “Women, Life, Freedom” in both English and German.

Some demonstrators said they had come from elsewhere in Germany and other European countries to show their support.

“It is so important for us to be here, to be the voice of the people of Iran, who are killed on the streets,” said Shakib Lolo, who is from Iran but lives in the Netherlands.

“And this is not a protest anymore, this is a revolution, in Iran. And the people of the world have to see it,” Lolo added.

As NPR notes: The movement in Iran is rooted in the same issues as in the U.S. and around the globe, said protester Samin Aayanifard, 28, who left Iran three years ago.