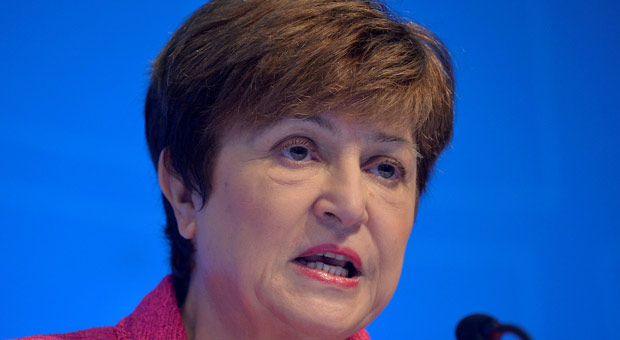 Ukraine needs between $3 billion and $4 billion every month to keep its government from collapsing amid the ongoing conflict with Russia, the International Monetary Fund (IMF) said.

“This requires actions on the part of the authorities but, importantly also the international community,” Georgieva said.

Georgieva said the billions of dollars in financial aid would go towards rebuilding infrastructure, energy imports, and basic social services in Ukraine.

“We all have to be alive to the possibility that social and infrastructure requirements could push financing needs beyond this range, depending on the evolution of the war,” she noted.

Ukrainian President Volodymyr Zelensky made an appeal to international donors for billions of dollars the same day as the IMF’s estimate.

According to Zelensky, his country needs roughly $38 billion to $55 billion to cover next year’s estimated budget deficit.

The Ukrainian leader said another $17 billion was needed to help the country rebuild critical infrastructures, like housing, energy facilities, and schools.

“The more assistance Ukraine gets now, the sooner we’ll come to an end to the Russian war, and the sooner and more reliably we will guarantee that such a cruel war will not spread into other countries,” Zelensky said via video teleconference to finance ministers at the World Bank and IMF annual meetings on Wednesday.

$35 billion in grant and loan financing has already been provided by the IMF and World Bank to Ukraine this year alone, Georgieva said on Wednesday.

The IMF and World Bank have already provided Ukraine with $35 billion in grant and loan financing this year, Georgieva said on Wednesday.

Meanwhile, U.S. Treasury Secretary Janet Yellen suggested they would continue to pressure the United States to provide aid to Ukraine over the next year.

Yellen urged financial donors to “keep stepping up” to provide financing to Ukraine, noting Washington “recently reaffirmed our commitment to Ukraine through congressional approval of another $4.5 billion in grant assistance, which we will begin to disburse in the coming weeks.”

“This is in addition to the $8.5 billion in grants already disbursed, making the United States the largest provider of economic assistance to Ukraine,” Yellen said.

“As Russia’s shameful actions continue, we must continue our joint efforts and begin planning for Ukraine’s needs in 2023,” Yellen added.

Ukraine is a money pit, just like Afghanistan…and the same idiots are in charge.

Let them collapse, and quit wasting America’s money. The sooner they go down, the sooner our politicians will be prevented from laundering money there.

I think it’s a bunch of bull💩. There are enough issues in the United States high inflation, high gas, high food, high energy costs but NO RELIEFE for us but we keep sending billions to them. Why the h**l don’t they start trying to do peace talks. Zelenski has a 35 million dollar home in Florida along with 8 other homes. Private jets, bought his parents an 8 million dollar mansion and has 1.4 billion dollars in off shore accounts that no country can touch. This is nothing but money laundering

Why in the world would the corrupt imf have anything to do with managing the money in Ukraine????? I guess it doesn’t have enough on its plate to deal with Putin, they have to deal with highway robbers too!!!

Even if it is worthy idea to fund Ukraine, they have a terrible record of corruption. I fear much money will go to lining the pockets of corrupt officials instead helping their people.

Stop funding the Ukriane and let them rot. They were dumb enough to allow America to use them to attack Russia, so give them nothing. Let the rich Globalist Elites fund the Uki’s right out of there own pockets.