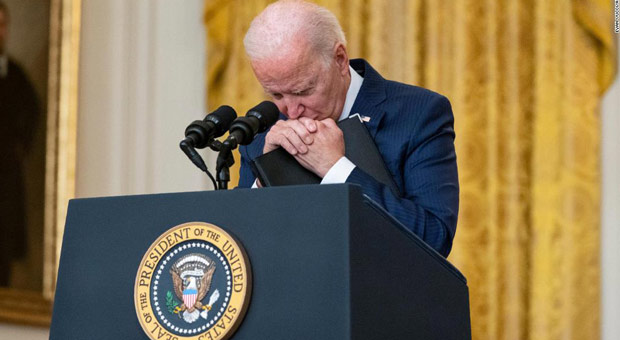 House Republicans are reportedly laying the groundwork for an investigation into Joe Biden’s deadly withdrawal of U.S. troops from Afghanistan last year.

“It has been over a year since the Biden Administration’s botched Afghanistan withdrawal and the American people have not received any answers about this national security and humanitarian catastrophe. U.S. servicemen and women lost their lives, thousands of Americans were abandoned, billions of taxpayer dollars are still unaccounted for, military equipment fell into the hands of the Taliban, progress for Afghan women has stalled, and the entire region is under hostile Taliban control. Under a Republican majority, the Biden Administration’s obstruction of this investigation will be met with the power of the gavel,” Comer said in a statement.

The Kentucky Republican refers to emails sent by Special Investigator General for Afghanistan Reconstruction John Sopko in which he defers sending information to the Oversight Committee until the department could complete its own evaluation,

“The Special Inspector General for Afghanistan Reconstruction (SIGAR) has notified this committee on multiple occasions of State’s obstruction to their congressionally requested investigations of the Afghanistan withdrawal and the continued risks to humanitarian and development assistance. This lack of cooperation raises serious questions,” Comer wrote. “What does State have to hide?”

Comer also included emails from the U.S. Agency for International Development and the Treasury Department, accusing officials of “deferring cooperation” due to “lack of jurisdiction.”

As the Washington Examiner reported:

As Republicans prepare to take control of the House next month, Comer has sent letters to the State Department, the National Security Council, the Department of Homeland Security, the Pentagon, and the USAID, requesting internal communications or any related information about the planning of the September 2021 troop withdrawal from Afghanistan.

The Oversight Committee is particularly interested in investigating the decision to conduct airlifts out of the Hamid Karzai International Airport and to permit the Taliban to be responsible for the airport’s security. Lawmakers will also investigate the lack of planning to help relocate refugees who were taken out of Afghanistan.

The investigation comes more than a year after the United States completed a full withdrawal of its troops from Afghanistan, airlifting more than 12,000 people out of the country as the Taliban quickly seized control of the government. The operation has been heavily scrutinized, particularly after a suicide attack outside the Hamid airport left 13 Americans and roughly 200 Afghans dead.

The investigation is one of many House Republicans plan to pursue once they take control in January next year.

Last month, Comer and Jim Jordan officially announced an investigation into Joe Biden, alleging he was directly involved in overseas business dealings alongside his son Hunter.

As The Daily Fetched reported, Comer said the Biden family “flourished and became millionaires by simply offering access to the family.”

“Was Joe Biden directly involved with Hunter Biden’s business deals, and is he compromised? That’s our investigation,” Comer said.

Comer is the incoming chair of the House Oversight Committee, while Jordan is expected to chair the Judiciary Committee soon.

Thank God! What Biden did was the actions of a despot, especially evident when, after the horrendous travestly, Biden said “It was a fantastic success!”.

Another waste of taxpayer dollars. Bombshell this. Revelation that. Keeps the bloggers getting clicks but never gets the American People any closer to justice.

Banana republics are not fixed, only seceded from or destroyed.
That is because courts, votes and laws are all rigged.
Until people realize that there will be no justice.