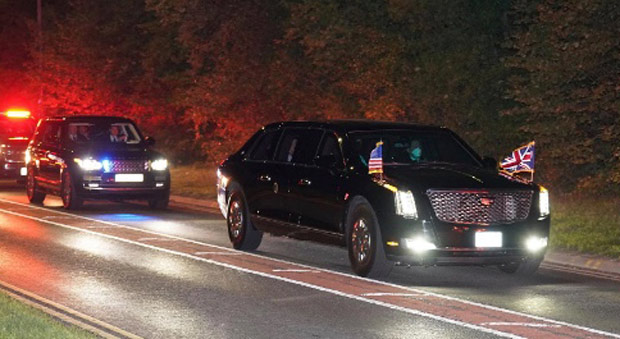 President Joe Biden will travel to the funeral of Queen Elizabeth II in his own private car, despite his ‘climate concerns.’

Biden’s transportation choice contrasts with other world leaders, including the Japanese Emperor, who is taking the bus.

Japan’s Emperor Naruhito joins other world leaders who will arrive by bus to the Queen’s funeral.

But green agenda advocate Joe Biden will make his way there in a gas-guzzling armored car.

British authorities discouraged foreign officials from using private cars and helicopters while also discouraging using private or government jets to travel to at the Queen’s funeral.

The British government cited “logistical difficulties” as the reason for avoiding private transport, saying restrictions would also help Westminster prevent the embarrassment of hundreds of private jets arriving in the capital. At the same time, the public is forced to cut back on carbon emissions.

But U.S. President Joe Biden will not be playing ball and going against his own “climate concerns” by using his own private vehicle.

The 10-tonne behemoth, known as “The Beast,” is armored against explosives and small arms fire.

Biden also took a whole fleet of additional vehicles to the U.K, adding to his substantial carbon footprint.

Meanwhile, British Prime Minister, Liz Truss, called of a meeting with Joe Biden until after the funeral.

As The BBC reported: No 10 said a “full bilateral meeting” between the PM and Mr Biden would instead take place at the UN General Assembly on Wednesday.

It is thought holding the talks after the period of national mourning would allow more wide-ranging discussions.

The Queen’s funeral will be one of the biggest diplomatic events of recent years, with 500 heads of state and foreign dignitaries expected to attend.