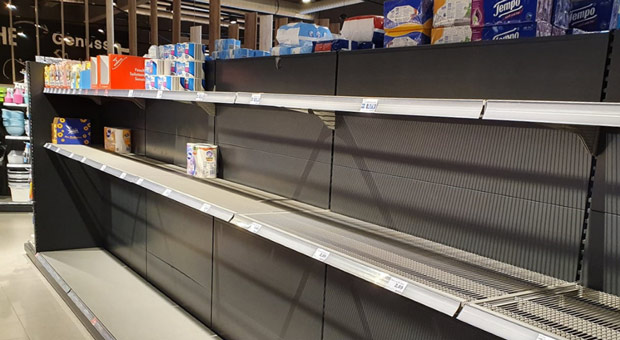 Supermarkets throughout Germany are being left with empty shelves as soaring inflation renders the sale of a wide range of products unprofitable.

Products like Kellogg’s cornflakes to Coca-Cola have vanished from supermarkets throughout Germany after they became unprofitable to sell due to differentials in inflation.

Germany saw the overall inflation rate hit 10 percent in September, with the EU-wide inflation falling just short of 11 percent amid the ongoing energy crisis, fueled by the Ukraine war and the country’s green agenda.

The inflation rate in the European Union rose to 10.9 percent in September, compared to 10.1 percent in August, according to the Eurostat statistical office.

The highest year-over-year rate of inflation recorded was in the Baltic countries of Estonia (24.1 percent), Lithuania (22.5 percent), and Latvia (22 percent). Conversely, the lowest inflation rates for September were recorded in France (6.2 percent), Malta (7.4 percent), and Finland (8.4 percent). Also in Germany, inflation rose by 2.1 percentage points compared to August, reaching 10.9 percent.

The inflation rate is now having a knock-on effect on the supply of food products within Germany as companies compete over the pricing of various items.

Food giants like Coca-Cola, Pepsi, and Mars have been pushing for higher prices in German supermarkets to preserve profitability.

But retailers have strongly resisted the push for profits, with one accusing major companies of “price gouging” and “usury.”

“Not only Mars, but also many other international brand groups such as Coca-Cola or Procter & Gamble are currently trying to ride the wave of inflation with excessive price demands in order to increase their returns,” a spokesman for the Edaka chain of supermarkets claimed.

The official also claimed a number of major companies have now halted deliveries to the chains, something they alleged is being used to pressure supermarkets.

“They use unilateral delivery stops as a means of exerting pressure on retailers,” the spokesman added.

Meanwhile, supplies are being cut off to other supermarkets throughout the country as retailers refuse to purchase products from well-known suppliers.

“The situation in the industry is critical to catastrophic,” Federal Association of the Food Industry general manager Christoph Minkoff said.

The ongoing feud between supermarkets and producers has now resulted in empty shelves.

This perfect storm of energy woes in Germany will likely leave many unable to adequately heat their homes due to the ongoing gas shortage.