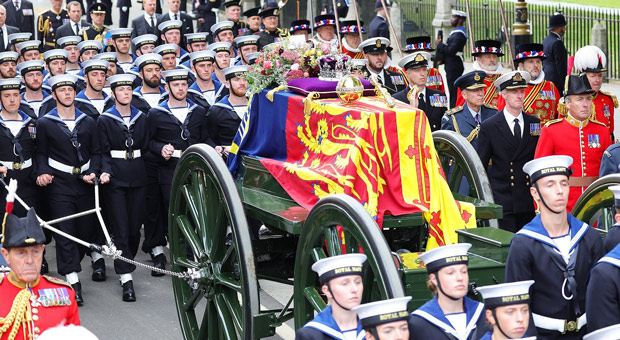 Der Spiegel posted an op-ed article on the day of the Queen’s funeral, attacking the late monarch for not taking action to stop Britain from exiting the EU.

The article, titled: ‘Where the Queen failed,’ accuses the Queen of having “broke” her duty by failing to step in to prevent Britain from leaving the European Union.

“But one thing has to be said: The Queen could have prevented Brexit. But she didn’t do it.”

“The Queen began with Winston Churchill, the character of the century, and ended with Boris Johnson, the lying joker,” the pundit continued. “If she had prevented Brexit, she would have been spared at least this penalty.”

The journalist also says the Queen’s failure to interfere in the referendum has made it more likely the UK will break up over the coming decades.

“Today it is said that the country’s youth, who have to pay for Brexit, are turning their backs on the crown,” Blome said. “According to a survey, only 33% of 18- to 24-year-olds support the monarchy. Does that surprise anyone?”

“It may be irreverent to ask this question at the open grave, but that doesn’t make it go away,” he wrote. “In any case, the breakup of the UK is more likely after Brexit than before.”

The article represents rampant Europhilia and anti-democratic sentiment amongst the German political elite.

Germany’s ruling leftist coalition has openly stated its goal of a federal EU superstate, with a ‘Traffic Light’ coalition government being accused of pushing towards establishing a “United States of Europe.”

Germany’s leftist political mismanagement has only made fears worse that the right could soon gain popularity should people be left unable to heat their homes due to energy shortages.

One official called people expressing fears about the energy crisis “enemies of the state.”

As we reported last month, Herbert Reul (CDU), the interior minister of the German state of North Rhine-Westphalia (NRW), said that the anti-mandatory vaxx and anti-lockdown demonstrators have shifted to a new cause, which is the energy crisis.

Reul told German news outlet NT that German security services were keeping an eye on “extremists” planning to infiltrate the protests via the Telegram messenger app, which the German authorities tied but failed to ban.

“You can already tell from those who are out there,” said Reul.

“The protesters no longer talk about coronavirus or vaccination. But they are now misusing people’s worries and fears in other fields. (…) It’s almost something like new enemies of the state that are establishing themselves.”