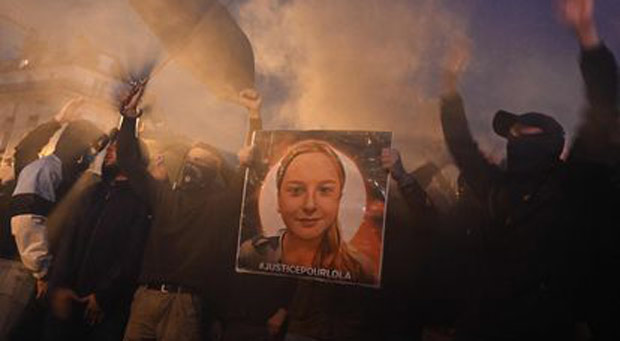 A week following the initial reports on the brutal rape and murder of the 12-year-old Parisian schoolgirl, only known as Lola, fierce debates have dominated headlines about the French apparent lax immigration policy.

But instead of trying to fix the root cause of the problem, which allowed such a tragedy to happen, the prosecutor’s office in the French city of Lyon opened an inquiry into possible incitement to hatred by a right-wing group that called out the inaction of the French government.

The investigation was opened after the matter was referred to the public prosecutor.

The prosecutor’s office said it had launched the investigation into the charge of “public incitement to hatred or violence against a person or group of people because of their origin or their membership of an ethnic group, nation, race or religion.”

The probe has been entrusted to the Rhône departmental public security directorate.

Lyon mayor Gregory Doucet called on President Emmanuel Macron to act against “those who incite hatred and demonstrate violent and anti-republican behavior,” citing the demonstration on Friday, RMX News reported.

Doucet also called for the dissolution of a far-right group in Lyon known as Remparts.

In the wake of the murder of Lola, French conservative officials called for carrying out the so-called obligations to leave French territory (OQTFs), to which the main suspect was subject.

According to official data from the French government, the Algerian murder suspect is one of many who have avoided deportation.

The case highlights French authorities have been unable to enforce immigration law, only succeeding in enforcing 0.2 percent of the expulsion orders.

The main suspect, a 24-year-old woman, was arrested on Monday and put under formal investigation on accusations of murder, rape, and acts of torture.

A tribute to the slain girl was taking place on Friday evening in the northern town of Fouquereuil, where Lola’s family is from and where they have retreated.

C’mon, man. Nothin’ to see here. Happens every day, on the streets of Gay Paree. Simply another example of a moslem ….. must bein’ a moslem.

“The case highlights French authorities have been unable to enforce immigration law, only succeeding in enforcing 0.2 percent of the expulsion orders.“

All by design. If you don’t follow the laws, why have them? 0.2% is blatant disregard for the law. Throw the politicians out!

You can see, they aren’t interested in the law breakers and murderers, just the people that complain
about it.
Watch the people (conservatives) go to jail.

I don,t live there but the W Europeans are on a mass extinction march. Best part is not 1 fire arm to be found or used. Alas, we have our own nightmare with joey bag of diapers and his mob. Best of luck folks. You will need it.

Don’t let your children out of your sight, even within your own building.
No one is interested in your children’s future but you.