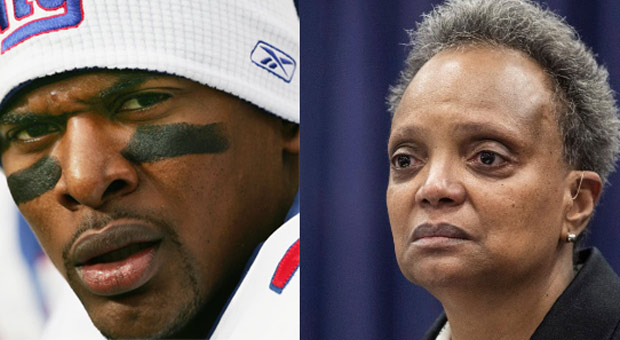 Brewer, a Trump supporter, made the remarks in an interview with Fox News’s Neil Cavuto, who said the ad made it appear as if crime was under control before playing a section that prompted Brewer to react.

“But on crime, Mayor Lightfoot’s got a plan,” the ad claims.

“When it comes to new strategies, new technology, Lightfoot’s invested more than any mayor. Those are facts. Anyone who says there’s simple solutions is lying.”

“I think that is the issue we face right now in cities like Chicago and all over the country is that many of our leaders have the audacity not to address these issues,” he said.

Brewer expressed shock at the rise of violent crimes.

“You hear the stories of these poor people, whether they’re store owners, or just folks trying to live their lives, sending their kids to school every day,” he continued.

“I’ve been in two prisons this week. I was actually in a juvenile facility yesterday. To see the spike in juvenile crime, in gun violence, it really is depressing. I must admit, I was blown away by the number of violent crimes happening by kids at such a young age.”

RELATED: Mayor Lightfoot Tells McDonald’s CEO to ‘Educate Himself’ After He Warns of Rising Crime

The former NFL player said Chicago is a hotbed for violence and the worst in the U.S.

The former NFL player added that Chicago was where the problem of violence in the U.S. was at its worst.

“And Chicago is the epicenter of this disaster,” he said.

“And so for Lori Lightfoot to get on TV and to run an ad like this that manipulates so many people, it’s disheartening. It’s sickening. Manipulation is witchcraft. This is something that is demonic, spiritually, for you not to really have the love in your heart for the people who live in that great city. Enough is enough.”

Violent crime had risen in Chicago by 37% in October 2022, with more than 2,300 shooting incidents reported.

Despite the city falling into an abyss of violent crime, Lightfoot decided she was worthy of a potential 5% raise in salary.

“To be clear, the ordinance that was introduced today would put the Mayor, the city treasurer, and the clerk in line with all the other elected officials regarding a cost of living increase,” Mayor Lightfoot said at the time.

“It’s not a salary increase, I want to make sure that’s clear, and it puts us in line with the aldermen. It would not go in effect until 2024 at that point, and each member, the Mayor, the clerk, and the treasurer would have the ability to opt-in or opt-out,” she said.

Democratic Mayor Lori Lightfoot’s Chicago ended 2022 with over 723 homicides, another tragic figure showing the city is far from ending its bloodbath epidemic.

As The Daily Fetched reported, 2021 proved the deadliest year for Chicago, with 797 homicides – the largest in a quarter of a century.

If you met this woman on the street you 1st reaction would be “Crack head or heroin addict!”. I don;t think that’s far from the truth.

Love you Jack Brewer, thinking for yourself…

hierarchy: they’re in charge, they truly care only about accumulating more power and control- whatever they speak of in public is in support of this hierarchical agenda: and we are supposed to just suck it up buttercup and be good little slaves.

and they shall continue with this agenda until a Greater Hierarchy puts a stop to them .

for the tyrants seek to manipulate us using even Scripture saying we are to be subject unto they authority God has set over us. But they neglect of course to remind us of whom exactly is the supreme authority in this Republic, that would be us ‘ OF THE PEOPLE, BY THE PEOPLE, FOR THE PEOPLE. ‘. We are that supreme authority and it is they who are disobedient to God in not obeying us.

Detective Shaved Longcock, WHERE ARE YOU??? We need Irate Irishman N O W !!!!

The time will come and now is when there will be only one solution to liberal scum. And it is not the courts. You can’t get justice from judges who think women have penises. It’s not the legislature since they’ll have opposition voted in by people who think women have penises. There is only one solution TO satanic people who think men menstruate. In an unrelated thought here’s a quote from Mark Twain

“An ideal form of government is democracy tempered with assassination.” Mark Twain:

Harvard Abruptly Shuts Down 'Disinformation' Research Project Led by Hunter Biden Laptop Skeptic
Harvard’s Kennedy School of Government has pulled the plug on its “Disinformation”...
No posts found
wpDiscuz
8
0
What are your thoughts? Click to commentx
()
x
| Reply