Federal Monitors inside Polling Places REJECTED in Florida: ‘Not Permitted’ 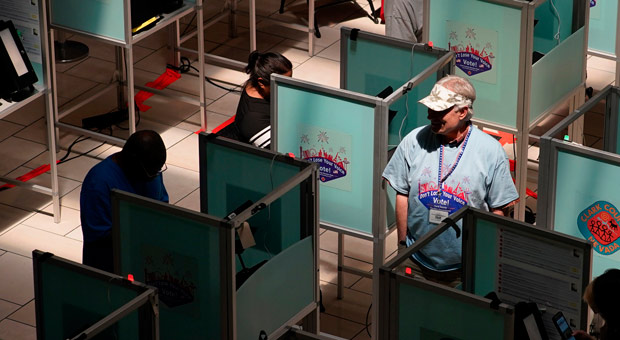 Federal Election Day poll monitors are “not permitted” inside polling places under Florida law, The DeSantis administration warned on Monday.

Florida will send its own monitors to “ensure there is no interference in the voting process,” according to reports.

The DOJ released on Monday a list of 64 jurisdictions within 24 states in which the department plans to send attorneys to “monitor for compliance with federal voting rights laws” on Election Day.

Broward, Miami-Dade, and Palm Beach counties in Florida are included in that list.

Brad McVay, general counsel to Florida’s Department of State, told the Civil Rights Division of the Justice Department in a Monday letter that the DOJ “seem[ed] to indicate” that these monitors will be placed inside polling places. However, he said that is not permitted.

“Section 102.031(3)(a) of the Florida Statutes lists the people who ‘may enter any polling room or polling place,'” McVay wrote. “Department of Justice personnel are not included on the list.”

“Even if they could qualify as ‘law enforcement… absent some evidence concerning the need for federal intrusion, or some federal statute that preempts Florida law, the presence of federal law enforcement inside polling places would be counterproductive and could potentially undermine confidence in the election,” McVay warned.

The DOJ’s announcement that it will deploy poll watchers is in keeping with the department’s standard procedure every election year, but with a noticeable uptick in the number of covered jurisdictions this year. The Trump-era DOJ deployed monitors in 2018 to 25 jurisdictions and in 2020 to 44 jurisdictions. During Obama’s last term in 2016, the DOJ sent monitors to 67 jurisdictions.

The DOJ says the monitors’ enforcement focus will be to “enforce the civil provisions of federal statutes that protect the right to vote, including the Voting Rights Act, the Uniformed and Overseas Citizens Absentee Voting Act, the National Voter Registration Act, the Help America Vote Act and the Civil Rights Acts.”

“The division’s Disability Rights Section enforces the Americans with Disabilities Act (ADA) to ensure that persons with disabilities have a full and equal opportunity to vote,” the department said.

McVay added in his letter that the DOJ has failed to “detail the need for federal monitors” in the three Florida counties.

“Your letters simply provide a non-exhaustive list of federal elections statutes as the basis for this action without pointing to any specific statutory authorization,” McVay said.

He also noted that during a Monday phone call between his office and DOJ, he asked for “specific statutory authorization,” which was not provided to him on the call.

McVay concluded by notifying the DOJ that the Florida Department of State “invokes its authority” under a section a Florida statute that says “upon the written direction of the Secretary of State, any employee of the Department of State having expertise in the matter of concern to the Secretary of State shall have full access to all premises, records, equipment, and staff of the supervisor of elections,” and will send its own monitors to the three targeted jurisdictions.

“These monitors will ensure that there is no interference with the voting process,” McVay continued.