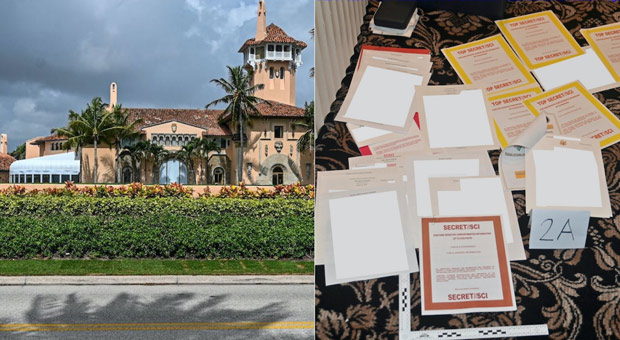 Over 50 empty folders marked “CLASSIFIED” were seized by the FBI during the unprecedented raid of former President Donald Trump’s Mar-a-Lago estate last month.

A detailed property receipt of the seized documents showed the FBI found a total of 50 empty folders marked as ‘classified, ‘ 43 folders were in Trump’s office, while several others were found in the storage room.

It’s unclear whether the empty folders were in the recent photo released by the DOJ showing classified folders scattered across the floor.

On Thursday, Federal Judge Aileen Cannon ordered the DOJ to unseal a more detailed property receipt during a hearing.

The unsealed property receipt also shows that 40 empty folders marked “Return to Staff Secretary/Military Aide” were seized by the FBI.

According to various reports, some government documents were in boxes along with newspapers and magazines.

“The new “detailed” inventory list only further proves that this unprecedented and unnecessary raid of President Trump’s home was not some surgical, confined search and retrieval that the Biden administration claims, it was a SMASH AND GRAB,” Budowich tweeted.

“These document disputes should be resolved under the Presidential Records Act, which requires cooperation and negotiation by NARA, not an armed FBI raid,” he added.

The status report confirmed the DOJ had completed its “preliminary review” of the seized document. However, it noted the review is one step in its “ongoing process in this active criminal investigation.”

Judge Cannon delayed her decision on Trump’s request to appoint a Special Master – and independent watchdog who would conduct a review of the seized documents.

Trump’s legal team argued that any documents seized were similar to an “overdue-library-book scenario” on Thursday.

“We’ve characterized it at times as an overdue-library-book scenario where there’s a dispute — not even a dispute — but ongoing negotiations with [the National Archives] that has suddenly been transformed into a criminal investigation,” Trump lawyer James Trusty said.

Trump’s attorneys said that Judge Cannon is now in a “unique position” to “help restore public confidence” in the DOJ.