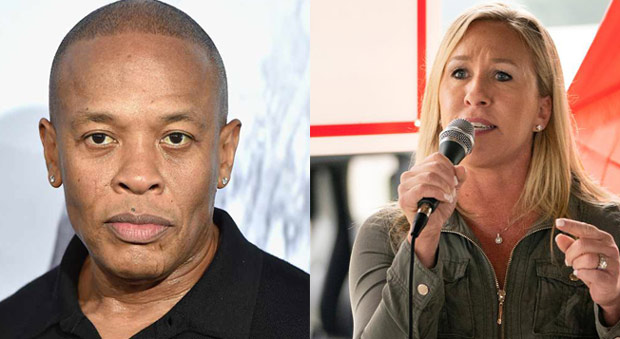 Rapper Dr. Dre threatened Rep. Marjorie Taylor Greene (R-GA) with legal action for using one of his songs in a Twitter video without his permission.

Twitter locked Greene out of her account after the song was flagged on the platform for copyright violations.

“We write you on behalf of our client, Andre Young p/k/a Dr. Dre, composer and performer of the hit song ‘Still D.R.E.,'” an attorney for Dre said in a letter to Greene.

“You are wrongfully exploiting this work through the various social media outlets to promote your divisive and hateful political agenda,” the letter added.

Greene posted an instrumental version of the song with the lyrics taken out.

The letter added that Dre, whose real name is Andre Young, “has not, and will never, grant you permission to broadcast or disseminate any of his music.”

“The use of ‘Still D.R.E.’ without permission constitutes copyright infringement in violation of 17 U.S.C. 501.”

RELATED: Marjorie Taylor Greene: ‘Someone Wanted to Get Me Killed’

“One might expect that, as a member of Congress, you would have a passing familiarity with the laws of our country,” the letter continued.

“It’s possible, though, that laws governing intellectual property are a little too arcane and insufficiently populist for you to really have spent much time on. We’re writing because we think an actual lawmaker should be making laws not breaking laws, especially those embodied in the constitution by the founding fathers.”

The letter demanded that Greene comply with their demand by the end of business on Wednesday.

But Greene fired back, blasting the subject matter of Dre’s music:

“While I appreciate the creative chord progression, I would never play your words of violence against women and police officers, and your glorification of the thug life and drugs,” Greene said.

Greene posted a screenshot of her statement with the caption, “The next episode,” a troll on the Rapper’s top song “The Next Episode.”

So funny how “artists” believe their music and lyrics are sooooooo valuable when a pol they don’t like uses it (think the rotten bastardo Springsteen when Reagan used his song), but they just LOVE it when a vile progressive leftist does the same. All of Hollywood is putrid pedo-grooming scum

So she would never even though she is? Used to like her. That all changed when she climbed under McCarthy’s desk, and now this…

Article: “Greene posted an instrumental version of the song with the lyrics taken out.”
Greene: “I would never play your words of violence against women…”
@Jon: “even though she is”

No, she is telling the truth. She played the instrumental music, but no words.

Reminds me of the hurrah over Rush’s use of “My City Was Gone.” Rush also got a cease and desist, but it turns out it was never The Pretenders (or was it Cindi Lauper?) who objected–just some management underling who didn’t like Rush. The song got millions more listeners from Rush using it to lead into his radio show, but of course the woke haters would rather go broke.

The Pretenders (and Chrissy Hynde specifically) did NOT like Rush, but her father was a big fan and she realized that whether she liked Rush or not, she loved her father so she let him use it.

If I remember correctly, I believe it was the author of the song did not like Rush, but her father did, and so she backed off and allowed Rush to use it.

Who would want to play his music. He probably wants go slap a women somewhere now.

Why are these miscreants referred to as “celebrities”? There is absolutely nothing about these people that merits celebrating any one of them.

Why give this clown any playtime? With all the great music, you are giving his violent music promotion.

So Dre is a complete idiot, brainwashed into mush by the left. Leftists are truly pathetic. Just spoiled, emotionall retarded children who never grew up or learned to think for themselves.

Almost all rap is scum music meant only to denigrate. Too bad they don’t get the same negative scrutiny as people who read the Bible. People like Dre are just trash

Every song that uses a standard chord progression is derivative.
At this time, not counting the words/lyrics, it’s almost impossible to create a new song that doesn’t have a significant similarity to another song that has the same chord progression.

I protest the word ‘music’. More poetry as noise.

I use to like it when entertainers just entertained, lol. Why should anyone care one iota what “Dr. Dre’”(🙄) thinks? … especially politically? …….and whoever it was that wrote that letter should be bitchslapped, jus’ sayin’!

Ummmm… he’ll get his royalties every time it airs/plays. Thanks for showing your true colors Dre! I’d love a count of how many people have used this track for content videos. I’m sure they haven’t been approached unless they were in the spotlight as well. I’ve wasted too much lifetime on this. Cheers everyone!

Harvard Abruptly Shuts Down 'Disinformation' Research Project Led by Hunter Biden Laptop Skeptic
Harvard’s Kennedy School of Government has pulled the plug on its “Disinformation”...
No posts found
wpDiscuz
17
0
What are your thoughts? Click to commentx
()
x
| Reply