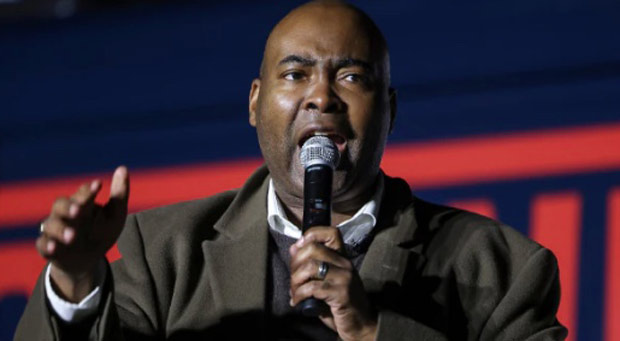 Following former President Donald Trump’s announcement to run for the presidency in 2024, DNC Chair Jaime Harrison lashed out, predicting he would lose.

“Donald Trump was a failure as president; that’s why he lost in 2020, and it’s why he will lose again,” DNC Chair Jaime Harrison said in a statement.

Harrison predicted that other Republicans would try to contest Trump’s effort to snag the Republican nomination.

Harrison Harrison said the Democratic Party would “be ready for them all.”

“Today is just the kickoff to what will be a messy Republican primary with candidates competing to be the most extreme MAGA Republican in the race,” Harrison added.

“Democrats stand ready to remind Americans what Trump brought America: the worst jobs record since the Great Depression, rigged the economy for the super-rich with massive tax giveaways to corporations, the right-wing Supreme Court that overturned Roe and paved the way for extreme Republicans across the country to criminalize abortion, a diminished standing across the world, and absolute chaos that culminated in inciting a mob to attack the Capitol to try to overturn an election he knew he lost,” Harrison also said.

RELATED: Kari Lake ‘Defeat’ Might Not Be Final – Recount ‘Possible’ in Next Few Days

On Tuesday, Trump formally announced he is running for the 2024 Republican nomination for president in Palm Beach, Florida.

“In order to make America great and glorious again. I am tonight announcing my candidacy for president of the United States,” Trump said at his Mar-a-Lago estate.

Leaders and donors appeared to turn on the former president, who announced his long-awaited reelection bid in a speech last night at his Mar-a-Lago home.

Governors, representatives, and even former Vice President Mike Pence said it was “time for a change’ and there were “better choices” for the party.

Former Trump aide, Mick Mulvaney, was asked by CNN’s Anderson Cooper if Trump’s decision to run was good for the party.

“No, I don’t,” Mulvaney said. “Because I think he’s the only Republican who could lose.”

“If he wins in 2024, now he’s the candidate, he is the likely Republican nominee. Can he be beaten head-to-head by Ron DeSantis or Tim Scott? Sure,” he added.