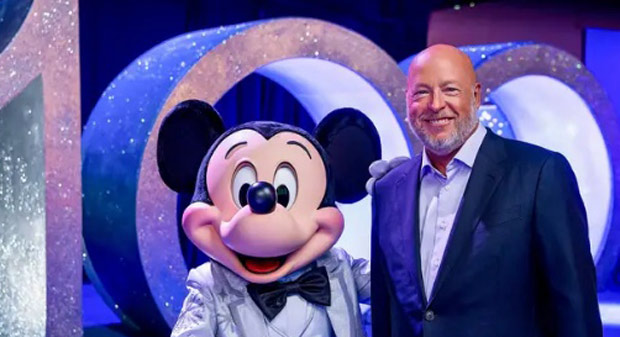 The dramatic turn of events has had a positive effect on the company’s shares.

As ZeroHedge reported, shares of Disney surged 13% in premarket trading following the surprise news. Shares are down more than 41% year-to-date (as of Friday’s close).

Iger, 71, “has agreed to serve as Disney’s CEO for two years, with a mandate from the Board to set the strategic direction for renewed growth and to work closely with the Board in developing a successor to lead the company at the completion of his term. Mr. Iger succeeds Bob Chapek, who has stepped down from his position,” Disney wrote in a press release.

“The Board has concluded that as Disney embarks on an increasingly complex period of industry transformation, Bob Iger is uniquely situated to lead the company through this pivotal period,” Susan Arnold, Chairman of the Board, wrote in a statement.

Chapek’s leadership has been mired with soaring costs at Disney+ as shares for the company headed for the worst annual decline since the 1970s.

According to the latest earnings report, they were well out of Wall Street expectations.

Disney stock crashed to new lows amid reports the entertainment giant is planning layoffs, travel limitations on its employees, and a hiring freeze.

Then Disney CEO Bob Chapek said the austerity measures would be difficult” but necessary, according to a letter to top company executives.

“I am fully aware this will be a difficult process for many of you and your teams. We are going to have to make tough and uncomfortable decisions,” Chapek said.

“But that is just what leadership requires, and I thank you in advance for stepping up during this important time,” he added.

“Our company has weathered many challenges during our 100-year history, and I have no doubt we will achieve our goals and create a more nimble company better suited to the environment of tomorrow,” Chapek continued.

Below is what analysts are saying about Iger’s return (viaBloomberg):

Disney is supposed to be a family friendly company, and they need to stop ALL leftist baloney. They need to cater to the majority, NOT the small minority of perverts and mentally ill!

Get rid of the groomers and those want to shove their perversions on our children. Nothing less will save Disney.

Woke fats broke until the evil ones can get a critical mass of zombified “useful idiots”, as Lenin called them.