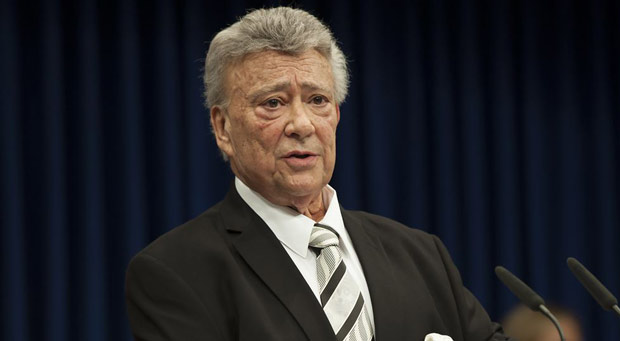 Pennsylvania state representative, Democrat Anthony “Tony” DeLuca, was reelected during the midterm elections, despite passing away on October 9.

DeLuca died after a brief battle with lymphoma last month.

The Democrat was 85,” the Pennsylvania House Democratic Caucus wrote.

DeLuca was Pennsylvania’s longest-serving state rep, according to the Pittsburgh Post-Gazette.

“While we’re incredibly saddened by the loss of Representative Tony DeLuca, we are proud to see the voters to continue to show their confidence in him and his commitment to Democratic values by re-electing him posthumously.”

DeLuca was a resident of Penn Hills for over 60 years. He got his start in politics serving on the Penn Hills Government Study Commission, then five years as a Penn Hills Councilman, followed by two years as Penn Hills Deputy Mayor before running for his legislative seat and defeating the Republican incumbent.

He graduated from Westinghouse High School and the Community College of Allegheny County. He had four children, nine grandchildren, and three great-grandchildren.

In addition to his late wife, he was preceded in death by his brother Larry and his parents.

ROB
Reply to  My Name

and voting too early, like fetterwoman before seeing his try to debate.

Oh well, they elected a Senator who is brain dead using the votes of the dead to help K**l a country full of people who are dead inside…welcome to Wokie’s ClownWorld of d***h, destruction and the politics of hate.

If you don’t trademark that, I’m totally gonna steal it!

And since he’s dead, he probably also voted for himself.

Not really.
It’s evidence of non thinkers allowed to vote.

No it wasn’t election fraud. All the dead people who voted in Pa. voted to be represented by a dead person. They elected a Demoncrat isn’t that who dead people vote for. Has been that way all my life. The dead have always voted Demoncrat.

Sad 46 states get the vote done and the same lame states are going to be come the deciding factor. Redo again. All I can think of is that the Democrat’s have all bought into killing Oil, Gas, Coal and are will to endure economic pain for awhile. What they don’t understand is that its going to be the rest of there lives. Its sad the Demi cons just cant come up with real solutions first before they crame there ideology down everyone’s throat. Rember the definition of Ideology….. Its an Idea! It doesent mean its a good one, can be bad as well……
Sad to bad

The dead voting for the dead.

A lot of dead DemocRATs vote. Guess they voted for this guy.

Concrete proof, as if any more were needed, that the sheeple vote by party affiliation and what they hear in the MSM. Oh yes, and Fetterman too.

Even today, Tony would win a debate with Joe Biden

The monkey’s are running the zoo !!

Just shows you how dumb Democrats are, vote the party line regardless no matter what.

C’mon people, this ain’t news. The dead have voted straight Democrat for hundreds of years, so of course they had to elect one of their own eventually.

Will a republican be on the run-off ballot? Who is choosing the candidates on the run-off ballot? Our Elections Are A Mess. Brain-dead Fetterman won!!!!! I suspect if this question was asked on a left platform, we would see where the cheating continues: Democrats, who will admit voting for Fedderman? No one would admit it and prove themselves an idiot.

Germany Bans Farmers from Fertilising Own Land to Serve EU 'Green Agenda'
Farmers in Germany have been banned from properly fertilizing large areas of their land under strict...
No posts found
wpDiscuz
19
0
What are your thoughts? Click to commentx
()
x
| Reply