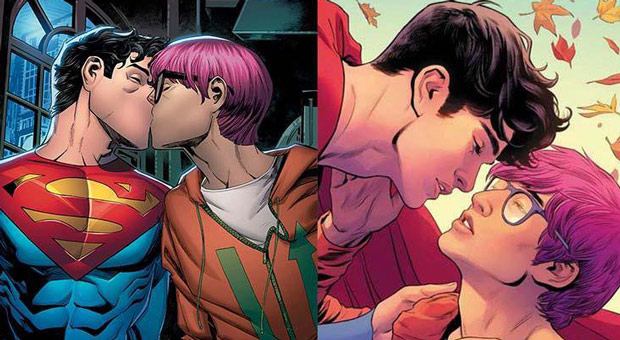 Kent, the son of Clark Kent and Lois Lane, began an intimate relationship with a ‘refugee hacktivist’ Jay Nakamura, by the series’ fifth issue.

“The idea of replacing Clark Kent with another straight white savior felt like a missed opportunity,” series author Tom Taylor told the New York Times in an interview in 2021.

But the ‘woke’ spin-off series didn’t connect with readers and has been struggling commercially since its launch.

Last month’s sales were the worst for the comic, with just 34,000 issues sold.

Mr. Taylor said that Jonathan Kent will be brought back as the main character in 2023 in “Adventures of Superman: Jon Kent,”

“I couldn’t be more excited for Jon Kent to headline the iconic Adventures of Superman,” the writer said, according to Bleeding Cool.

“It’s a real testament to the fantastic response of fans to Jon as Superman.”

Gabe Eltaeb, a colorist for DC Comics who quit last year in protest of the ‘America hating’ book, took to Twitter to celebrate the end of Superman: Son of Kal-El.

He also left his position at DC soon after learning that DC was removing America from Superman’s famous motto: ‘Truth, Justice and the American Way.’

Eltaeb then began working on his own ‘anti-woke’ comic, Isom, with writer Eric July.

The first issue of Isom sold 43,000 copies according to Rippaverse, it’s publisher.

Unlike Superman who comes from Metropolis – generally thought to be based on New York or Chicago – Isom, the protagonist of the eponymous ‘anti-woke’ comic, is from Texas.