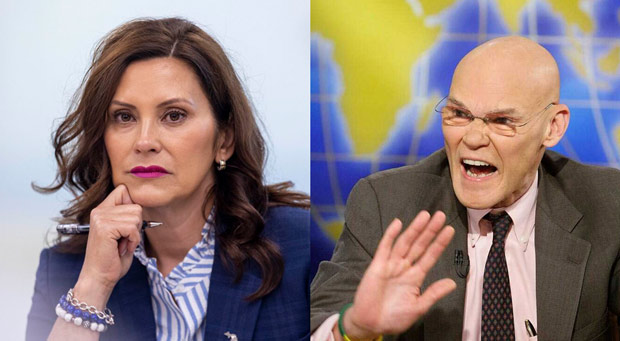 During an interview on MSNBC’s “The ReidOut,” Anchor Joy Reid said, “I feel the media has overplayed the importance of DeSantis and underplayed the victory for Whitmer.”

“Whitmer, to me, was the biggest single individual winner on election day because not only did she survive the kidnapping threat, she survived real threats to democracy in her state, got reelected by a healthy margin, and took over the state. Your thoughts?”

Carville said, “First of all, for 2024, 2028, she’s already in the talk of being a very serious presidential candidate if she runs.”

“I think people really understand what she’s done and how tough she is,” Carville said.

“Michigan Democrats, a bunch of these people, really worked hard and did a good job as they did in Pennsylvania,” he added.

RELATED: Lindsey Graham: ‘Definitely Not a Republican Wave, Hats Off To Democrats’

“I said this morning Josh Shapiro might have had the best campaign of the whole cycle to me. They were very aggressive,” he added.

“They got enough votes. I think they have helped Fetterman a lot. Yes, I think you are right to point out,” he continued.

“But I think Gretchen Whitmer is at the top of any conversation about any national figure of the Democratic Party. That is just a fact.”

As we reported on Thursday, MSNBC host Katy Tur speculated that Fetterman could run for the presidency someday.

Tur floated the viability of “Fetterman, as a nominee at some point for president” before noting his record for surpassing President Biden and former President Trump’s vote share in the state.

And thanks to how “fortified” the votes are she can expect to “win” with record breaking vote numbers, even if those numbers exceed registered voters.

Once corrupted a republic cannot be repaired – Thomas Jefferson.
The only way this banana republic gets fixed is after collapse or after secession because even if every leftist died tomorrow we would still have more in debts & unfunded liabilities (231 trillion) then total national assets (178 trillion with civilian assets included)
Secession negates all legal responsibility to all of it and will allow us to simply cut resources to leftist areas (hence why its on the legislative docket in Texas)

We don’t want or need this Nazi witch anywhere in our CONSTITUTIONAL REPUBLIC.

She isn’t even liked in Michigan she won the counties that were easy to cheat.

The election was stolen, looking a “drop and roll” statistics. Get rid of Dominion and o’seas vote counting.

I will never vore for that woman ever.
She is so controlling she wouldn’t let us buy garden seeds during the lockdown. She also wanted us to report on neighbors who had excess company visiting.
She is evil.

snakehead needs to crawl back under his rock.

Former Trump Allies Who have Turned against Him since Announcing 2024 Run
Some high-profile Republicans and onetime allies of former president Donald Trump have revealed their...
No posts found
wpDiscuz
7
0
What are your thoughts? Click to commentx
()
x
| Reply