California Teacher Refuses to Teach Grammar Because of ‘White Supremacy’ 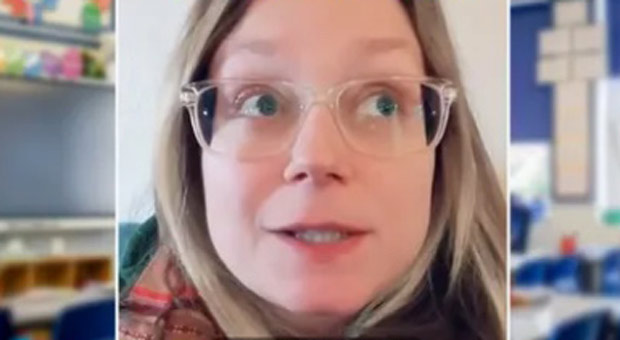 A California high school English teacher has claimed the overemphasis placed on writing rules and grammar is a symbol of “white supremacy” and is refusing to teach it.

Shaffer posted a video on TikTok, declaring her goal was to be “inclusive of all kinds of ways we use the language.”

“As an educator, I am constantly worried if I’m the problem. What do I mean by that? Well, public education is an institution that upholds lots of problematic systems in our society, like white supremacy and misogyny and colonization, et cetera,” Shaffer said, according to Fox News.

The teacher added to expect students to use proper syntax and grammar “are all made-up rules.”

“They’re arbitrary. They were created by Westerners in power, in linguistic justice” and part of “white supremacy” that “runs deep.”

Shaffer said she tries “to undermine that BS in my classroom as much as I can.”

“We study linguistics and the rules that we actually use to communicate instead of the made-up rules that white supremacy created for when we write papers and stuff, which is what scholars call the ‘language of power.'”

“Well, let’s look at how we write essays [where we] start with an introduction that includes a thesis, always cite your sources, use transition words like ‘however’ and ‘therefore.’ These are all made-up rules. They were created by Westerners in power. Which got me thinking, what if I started my school year with a unit honoring how we talk rather than teaching students how to write properly.”

In another video, Schaffer said student’s “codes” – how they speak at home or with friends – is “just as important, if not more than important,” than a boss’s expectations of how their employee communicate.

“Just because your teachers, your professors, and your boss may expect you to write and speak in a certain way that may not be natural to you does not mean that your more natural… languages are not important. They are just as important, if not more important than the ‘language of respectability,'” she said.

The teacher added she feels like a “cringe white lady” when “teaching students of color” about linguistics.

“Did I worry I was being a white savior? Absolutely. Was it uncomfortable? Definitely. But a lot of my students come here, and they’re uncomfortable with the white mainstream culture of public school life. So, I think it’s good for them to see their teacher deal with linguistic discomfort, too,” she said.

Schaffer also claims that the IQ bell curve and the SATs are “racist” because “The writers of these tests were made up almost entirely of white people… and they still are.”