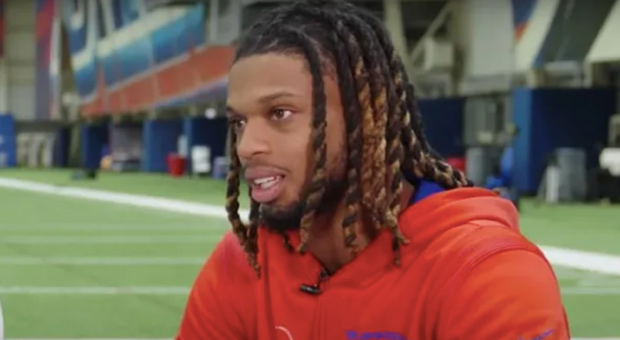 Buffalo Bills football player Damar Hamlin, who recently collapsed after suffering a cardiac arrest during a primetime US National Football League game, made a chilling remark in the weeks leading up to the incident.

During an interview on “One Bills Live” broadcast, Hamlin expressed his appreciation of the “super blessing” of being able to play professional football with his childhood friend and teammate, Dane Jackson.

“It feels so surreal, like, I can’t even describe it, but I cherish it every second that I can,” Hamlin said.

“Every second of every day. We just had our prayer, our DB prayer we do every Wednesday. [Jackson] was next to me and I just grabbed his hand a little bit harder, just because, you know, you never know when your last day could be that you get [to] experience something like this,” he said.

“I’m cherishing it every moment that I can,” Hamlin declared.

Hamlin and Jackson became friends as college teammates at Pittsburgh before they became professional players.

Jackson, however, suffered a neck injury earlier this year after his neck snapped back while being tackled during a game against the Tennessee Titans. He has since made a full recovery.

But Hamlin was less fortunate.

The 24-year-old safety collapsed and suffered a cardiac arrest after a routine tackle earlier this week. Hamlin was rushed to the University of Cincinnati Medical Center and is still in critical condition.

The athlete’s goal was to raise $2,500, but donations have since jumped to more than $6 million and counting.

“Rare but at a loss for words,” former Buffalo Bills wide receiver Andre Reed posted on Instagram. “Fans banding together in solidarity for #DamarHamlin, #StephonDiggs – a real one — going to the hospital, people donating to Damar’s toy drive …. this restores my faith in humanity.

“LET’S we be more like this in 2023. Remember what really matters in this lifetime.”

“#DamarHamlin … May GOD be with you in this time of need,” Reed concluded. “You’re an amazing young man.”

It sounds like Climate Change is really bad on people’s hearts.