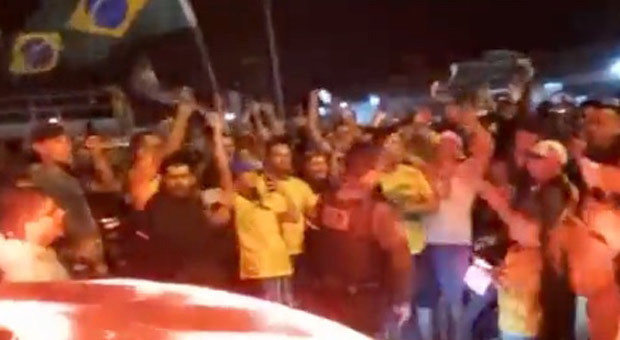 Following Monday night’s declaration, roadblocks began appearing up and down the country as protesters claimed the election was stolen from Jair Bolsonaro.

One video appeared to show police joining with the Bolsonarista truck drivers protesting “fraudulent” results of the Brazilian election.

Truckers blocking the roads now demand a recount, with some calling for Bolsonaro to stage a military coup to retain power.

At least 47 roadblocks were reported in 14 of Brazil’s 27 states.

Authorities counted over 100 roadblocks on Sunday.

Meanwhile, a video of people appearing to loot a food market was posted by Ian Miles Cheong.

“In each place, the situation is different because there is no leadership to negotiate,” the PRF said, explaining that individual truckers appear to be coordinating with each other via social media, without any central leadership.

Bolsonaro offered no public comment on the protests and is still yet to concede the race.

Lula was declared the winner by Brazil’s Supreme Electoral Court on Sunday with 50.9 percent of the vote to Bolsonaro’s 49.1 percent.