Bolsonaro: Ukraine War ‘Wouldn’t Have Happened’ If Trump was President 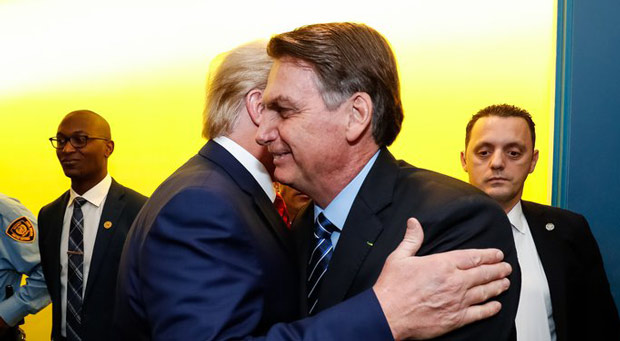 Brazil’s President Jair Bolsonaro said Russia’s invasion of Ukraine “would not have happened” if Donald Trump was still U.S. President.

Bolsonaro made the remarks in an interview with Brazilian news magazine Veja.

“Some think that the war in Ukraine would not have happened if he were still in power,” Bolsonaro said of President Trump.

“I agree with that,” he added.

Bolsonaro’s assessment aligns with Trump’s opinion that President Joe Biden and the former Obama-Biden administration are to blame for the invasion and 2014 annexation of Crimea.

“If properly handled, there was absolutely no reason that the situation currently happening in Ukraine should have happened at all,” Trump said in February.

“I know Vladimir Putin very well, and he would have never done during the Trump Administration what he is doing now, no way,” he said.

Trump “strongly” endorsed Bolsonaro ahead of the first round of the presidential race, calling him “a fantastic leader, a fantastic man, [and] one of the great presidents of any country in the world.”

Bolsonaro beat the polls by a wide margin in the first round, coming in at 43.3 per cent — well above the predicted 35 percent a poll.

Gustavo Flores-Macias, a professor in the Department of Government at Cornell University in the United States, said the Brazilian election results showed that pollsters “clearly haven’t figured out” how deep support runs for the country’s right-wing.

“It gives a sense the polls cannot be trusted, or the integrity of the election is in question,” he told Al Jazeera.

“The people that got out largely were conservatives, the ones who lost, so the votes should go to Bolsonaro,” he predicted.

I think there’s little doubt that the clumsy, provocative rhetoric of the Biden team early in the year pretty much pushed Putin into this universally regrettable war. Would Trump have followed this approach? Hardly. But Ukraine would have been pressured to give something up–maybe some land or maybe NATO membership.