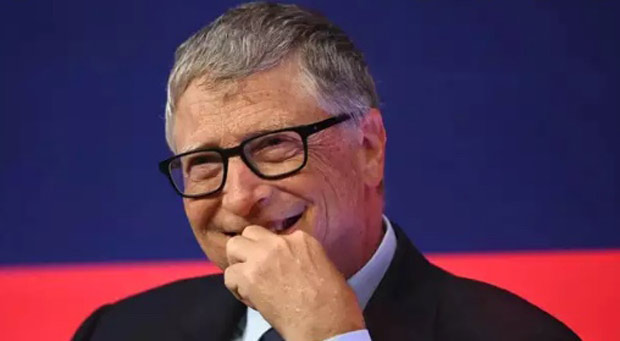 Although these genetically engineered seeds may appear a great advancement, the tech lord’s track record should be warning us to raise caution.

Last week we reported on a ‘creepy’ video from Gates which promoted genetically modified corn while he lip-syncs to a child’s voice.

The video captions: Corn “accounts for 30% of the food consumed in Africa. But it is at risk. African crop researchers are creating a new, more resilient type of corn.”

The name “magic seeds” are not an exaggeration, as Gates himself admitted that he has called these genetically manipulated corn seeds “magic seeds” in a recent op-ed.

“Fourteen years ago, our foundation began supporting a group of African crop researchers. Their goal was to develop a new type of maize — what I started calling ‘magic seeds,'” Gates wrote.

Gates, who has been secretly working on Biden’s inflation “reduction,” insisted the “magic seeds” – named ‘DroughtTEGO’ – are not really magical but said they do have important qualities.

“Of course, the seeds weren’t actually magic, but by breeding select varieties of the crop, the researchers believed they could produce a hybrid maize that would be more resistant to hotter, drier climates. They succeeded wildly,” Gates wrote.

Gates lauded his DroughtTEGO seeds as having a promising track record.

“When researchers in Kenya compared plots of this new maize, which they called ‘DroughtTEGO®,’ with the old one, they saw the DroughtTEGO farms were producing an average of 66 percent more grain per acre,” Gates continued.

“That harvest is enough to feed a family of six for an entire year, and the family would still have so much surplus maize that they could sell it for about $880, equivalent to five months of income for the average Kenyan. In fact, many farmers could finally afford to send their kids to school or build new homes once they switched to DroughtTEGO,” he continued.

Gates argued that these seeds are not being adopted quickly enough, adding, “Investment in agricultural R&D is still much too small.”

“It’s critical if we want to get the latest seed technology to farmers as fast as we can,” he exclaimed.

Despite the success of these seeds, though, Gates added that science has to keep working with newer modifications “as the environment changes in unpredictable ways.”

Modifying crops a solution to the global food crisis?

Gates suggested there need to be new efforts to modify crops.

“We need to speed this plant breeding work up, and one solution is what researchers call ‘predictive modeling.’ It’s artificial intelligence software that processes the genome sequences of crops along with environmental data — everything from soil samples to satellite imagery — and then conjures up a data-based vision of what farms will need to look like in the future. From this computer model, researchers can identify the optimal plant variety for a particular place. Or they can do the reverse: pinpoint the optimal place to grow a specific crop,” Gates said.

Although the notion of eliminating famine and improving crop yields sounds lovely, especially as a global food crisis looms, but we must take responsibility not to just blindly “trust the science,” something we did not too long ago, which brought forth catastrophic results.

Firstly, we need to look at Gates himself.

A few years back, Gates pushed the idea of blocking the sun’s rays from reaching the earth to fight “climate change.”

Reports revealed that the Microsoft billionaire was funding a project to spray particles in the earth’s atmosphere to reflect the sun’s rays back into space.

Earlier this year, Gates called for Western nations to ditch the real beef for the fake stuff.

“You can get used to the taste difference, and the claim is they’re going to make it taste even better over time,” he added.

“I do think all rich countries should move to 100% synthetic beef. You can get used to the taste difference, and the claim is they’re going to make it taste even better over time. Eventually, that green premium is modest enough that you can sort of change the [behavior of] people or use regulation to totally shift the demand.

Although Gates appears to understand this is a product nobody wants, he did say that if the government made it mandatory,’ it wouldn’t be a bad thing.

It is also important to note that Gates has become the single largest farmland owner in the United States after acquiring as many as 270,000 acres.

Gates’ apparent shady intentions prompted a South Dakota Congressman to ask why the billionaire was purchasing vast amounts of farmland.

“It has become clear in recent reports that Mr. Gates is the largest private farmland owner in America; he now owns nearly 270,000 acres of farmland across 19 states,” South Dakota Congressman Dusty Johnson said.

“Comparatively, the average farm size in 2021 was 445 acres, according to the United States Department of Agriculture’s Economic Research Service,” Johnson wrote in a letter addressed to committee chairman David Scott.

“I believe that Mr. Gates’ holdings across much of our nation are a significant portion that the Committee should not ignore.”

write to hebijudo@protonmail.com and inquire about their product. It has NOTHING to do with gates in any manner. but will improve your crops home and commercial productivity. NO GMOS or any nonsense like that