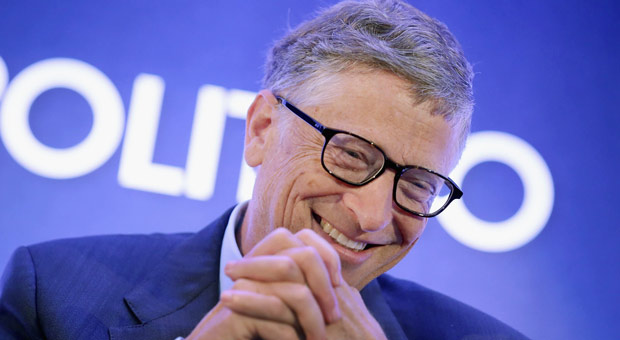 President Joe Biden’s “Inflation Reduction Act,” which is set to raise taxes on the middle class by as much as $20 billion, was made possible by none other than billionaire Bill Gates.

The bill was signed on Tuesday.

According to a recent Bloomberg article, Gates recalls how earlier this year, he tapped into a relationship with moderate Democratic Senators Joe Manchin, which he had been cultivating since at least 2019.

Gates said he has quietly lobbied Manchin and other senators in the quiet anticipation that large federal spending could be secured for the clean-energy transition.

Those discussions gave him reason to believe the Senator from West Virginia would come through for the climate — and he was willing to continue pressing the case himself until the very end. “The last month people felt like, OK, we tried, we’re done, it failed,” Gates said. “I believed it was a unique opportunity.” So he tapped into a relationship with Manchin that he’d cultivated for at least three years. “We were able to talk even at a time when he felt people weren’t listening.”

Gates and Manchin’s “relationship” apparently began when the Microsoft billionaire wooed the West Virginia Senator at a 2019 meal in Seattle – an effort to gain support for the clean-energy policy.

At the time, Manchin was the senior-most Democrat on the energy committee.

“My dialogue with Joe has been going on for quite a while,” said Gates.

After Manchin blocked the bill last year over concerns that it would increase inflation and national debt, Gates saw his opportunity.

Just a week later, Gates met with Manchin and his wife, Gayle Conelly Manchin, at a DC restaurant, where they talked about the “needs” of West Virginia.

Although Manchin wanted to preserve jobs at the center of the US coal industry, Gates suggested workers at the plants could simply swap over to nuclear plants – such as those from Gates’ TerraPower.

Later, an unconvinced Manchin announced that “Build Back Better” (or the old name for the Inflation Reduction Act) was “dead.”

Meanwhile, Democrats pulled together a small group of economists and other Manchin influencers to convince the Senator’s bill wouldn’t raise taxes on the middle class.

Chief executive officer of the National Wildlife Federation, Collin O’Mara, recruited economists from the University of Chicago and the Wharton School of the University of Pennsylvania in order to soothe Manchin’s concerns.

The economists were able to “send this signal that [the bill’s] going to help with the deficit,” O’Mara said.

“It’s going to be slightly deflationary, and it’s going to spur growth and investment in all these areas.”

Through this subtle alchemy, clean-energy investments could be reframed for Manchin as a hedge against future spikes in oil and gas prices and a way to potentially export more energy to Europe.

On July 7, Gates sprang into action when Manchin was spotted at the Sun Valley media conference in Idaho, which, coincidently, Gates also attended.

As The Bloomberg reads:

Through this subtle alchemy, clean-energy investments could be reframed for Manchin as a hedge against future spikes in oil and gas prices and a way to potentially export more energy to Europe.

Gates looks back at the new law with satisfaction. He achieved what he set out to do. “I will say that it’s one of the happier moments of my climate work,” Gates said. “I have two things that excite me about climate work. One is when policy gets done well, and this is by far the biggest moment like that.” His other pleasure comes from interviewing people at climate and clean-tech startups: “I hear about this amazing new way to make steel, cement and chemicals.

“I don’t want to take credit for what went on,” says Gates in the article.

So, in effect you can say that Gates is either an unregistered lobbyist, or an unelected member of Congress. Either way the American people will pay the price, as all of us will no doubt see a tax increase as is par for the course. I’m curious if Joe Manchin, or any other member of Congress for that matter, consulted his constituency about what they thought about the “Inflation Reduction Act”. Isn’t that who he or she represents? Doesn’t seem to be the case when people like Gates who can just pick up a phone or go out to dinner with any targeted member of Congress and beg for his favority cause, and as usual, the American people gets to pick up the tab when nobody asked us a d**n thing about anything. It all just sickens me. I’m past the point of being angry, it all just wants to make me throw up, because we the people are being sold out by the people we entrusted to represent us.