Biden Lashes Out After Being Fact-Checked: Twitter ‘Spews Lies All Across the World’ 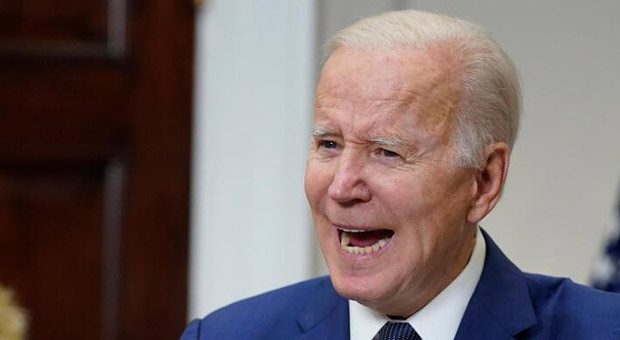 President Joe Biden has lashed out after Twitter fact-checked a White House tweet on Tuesday for taking credit for the upcoming big cost-of-living adjustment for Social Security benefits.

Biden’s frustration has been bubbling up since billionaire Elon Musk purchased Twitter, which could level the playing field for conservatives who are shadow banned or suspended from the platform.

“Now what are we all worried about: Elon Musk goes out and buys an outfit that sends – that spews lies all across the world,” he said days after being fact-checked.

Biden made an apparent attack on how Twitter will be run without the total censorship it had under its previous ownership.

“How do we expect kids to be able to understand what is at stake?” he asked.

Last month, Biden claimed the mainstream media had lost its ability to control the political narrative.

“The ability of newspapers to have much impact is de minimis,” he said at a fundraiser with House Speaker Nancy Pelosi, using a Latin phrase that means “lacking significance or importance.”

“They’ve been overtaken by the Internet,” he said.

“Look what’s happened now. Everything is changing because technology has changed,” he said.

At the event, Biden signalled his frustration that Americans would not be able to distinguish the truth if there were no editors to steer them in the right direction.

“How do people know the truth?” he asked.

“What do they — how do they make — make a distinction between fact and fiction? There’s so much — so much going on. And we’re in the middle of this,” Biden continued.

“It changed the politics of the world,” he said.

“And it goes all the way straight through to everything from the electronic changes,” Biden added.

Despite Biden’s claims that Twitter spreads lies, he has been doing it regularly without any blowback from mainstream media or social media platforms.

Earlier this week, Biden falsely claimed he met the ‘inventor’ of insulin despite the naturally occurring hormone being discovered in 1921 and the doctor dying a year before he was born.

The president was torched for his claim about insulin, a signature achievement by Canadian doctors Frederick Banting and Charles Best, who successfully isolated the hormone in July 1921.

Democrats love censorship…and rely on it to exist. It’s their life support system.

Poor little baby. Can’t take it when the tables are turned.

Nice pic. This is how I picture FJB all the time now…but when DID he turn into an angry skull?

This mans record is in concrete and proves that he is a liar, racist, exaggerator and a pervert!!!!! FACT!!!!!

The CEO of Dominion, the company that makes the voting machines, was interviewed on 60 minutes recently. Read this exchange.
“Do you use a Venezuelan company’s software that’s been used to steal elections in other countries?” Cooper asked.
“Absolutely not,” Poulos said. “Anderson, I can, I can cut all of
this short. We were founded in Toronto, which is where my family was
from. And there’s nothing to do with Venezuela.”
“Can you flip votes in the computer system?” Cooper asked. “Can you add votes that did not exist?”
“Absolutely not,” Poulos again responded.
And he lied his sorry a*s off. First he says they do not use the software that was used in Venezuela to steal elections ,implying that the software can steal elections. Then he says that software cannot flip or add votes in the system.
Of course it can, you can make the software turn out any result you want. I used to write software and in five minutes I could draw up a flow chart showing just how it can be done. What a lying moron.

Depends Biden and his grifter family is in total denial. He is an autocrat that depends on censorship. His appeal is to the low IQ voters and the graduate degree elitists. Liberalism is a mental disorder

They hate being fact checked with unbiased information, it’s not natural for them.