Biden Claims He Frequented Black Church during CRM, But Nobody Remembers Him 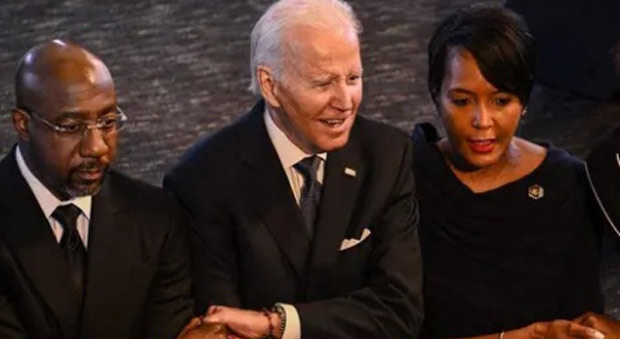 Biden has frequently claimed he attended services at a black church as a teenager, but church members in Wilmington don’t ever remember him attending.

“I may be a practicing Catholic, but [I] used to go to 7:30 Mass every morning in high school and then in college before I went to the black church.”

“Andy, it’s so great to see you, man,’ Biden continued. ‘You’re one of the greatest we’ve ever had. Andy and I took on apartheid in South Africa and a whole lot else. They didn’t want to see him coming. But we used to – that’s when we would organize to march and to desegregate the city,” Biden continued.

Of course, Biden could not help using the word “insurrection” while condemning “racism and extremism” during his remarks.

“We would go sit in Reverend Herring’s church, sit there before we’d go out, and try to change things when I was a kid in college and in high school,” Biden said, referencing the prominent African-American Union Baptist Church in Wilmington.

Some members claimed that while Biden befriended Rev. Herring as an adult, he did not attend their church as a teenager.

Herring’s long-time assistant Phyllis Drummond said he does not believe Biden attended in the 1960s.

“No, not at our building,” Drummond told the Washington Free Beacon in a 2020 interview. “I think he was probably in Claymont, [Del.,] [or] in Pennsylvania then.”

Biden repeated the claim he grew up in a black church in a separate speech on the campaign trail.

“When I was a teenager in Delaware, for real, I got involved in the civil rights movement,’ Biden said at Bethlehem Baptist Church in South Carolina in January 2020.

In pure gaffe style, Biden even made comments that contradicted the account.

When reporters questioned Biden’s claim in 1987 that he marched in the civil rights movement, he admitted he ‘wasn’t an activist and that his most significant experience with civil rights as a youth was when he worked at a swimming pool with mostly black customers.

The revelations Biden may have been exaggerating or outright lying about attending a black church and participating in the civil rights movement came simultaneously during the campaign when he was forced to admit his repeated claims about being arrested with Young in apartheid-era South Africa were untrue.

“I was never arrested, and I don’t think [Biden] was either,” Young said at the time.

“I guess I wasn’t arrested, I was stopped,” Biden said.

lying is not honoring the memory of mlk jr.

And in a church, of all places

BIDEN IS A LIAR, PERIOD

Not even worth discussing. If it comes out of Biden’s mouth, it’s a lie.

“I was born a poor black child”. Do you remember that line from the movie “The j**k”?

This guy is a pathological liar. How can a sane person vote for him?