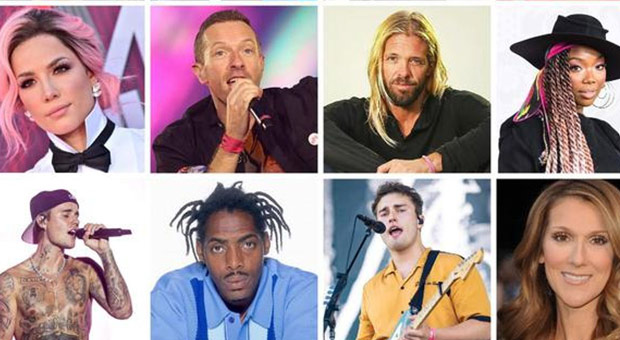 As we reach the end of 2022, reports of singers and performers canceling tours due to ill health have become increasingly common.

The steady flow of such headlines has seemingly diluted the shock value, where it would once be driven by its rarity. But sadly, theses headlines are no longer rare. In fact, such reports are becoming so common they rarely make it to the front page anymore.

Below is a list of 53 performers (although not exhaustive) who have died, fell ill, or collapsed on or off stage in the last three months – Via FalconsCAFE.

Affectionately known as Mikaben, singer Michael Benjamin died at 41 in October 2022. The singer had been performing onstage in Paris with the Haitian konpa band Carimi when he collapsed and died.

Magician Arsenio Puro died unexpectedly after a heart attack on stage in October 2022.

R&B singer-songwriter Joyce Sims died at the age of 63, with no cause of death given.

The popular singer Halsey canceled her upcoming tour due to unforeseen circumstances.

Sir Ringo Starr announced the cancellation of the rest of his North American tour on 14 October 2022 due to health issues.

It was reported that R&B singer Brandy suffered a possible seizure and was rushed to the hospital on 12 October 2022.

British rock band Coldplay postponed their Brazil tour due to the ill health of their frontman Chris Martin. The 45-year-old singer had a serious lung infection and was ordered to rest.

Singer Stevie Nicks’ postpones her show due to a respiratory illness.

Popular Odia singer Murali Mohapatra collapsed and died while performing at a Durga Puja cultural event in Odisha’s Koraput district. Mr. Mohapatra, reportedly unwell, suddenly sat down on a chair on the stage after singing four songs in Jeyore town.

The Avalanches canceled their 2022 tour of North America “due to serious illness.”

The singer of the Antihéroes Rock Band, Andrés Pancho, 50, died after he suffered a fatal heart attack on stage on Sunday, 3 October.

Guitarist Lindsey Buckingham announced on 3 October that he would not finish out the rest of his European tour due to ongoing health issues.

Roberto Gonzalo, bassist of the Riojan rock group Tierra Santa, suffered a heart attack in full concert on the 2 October.

UFO frontman Phil Mogg suffered a heart attack in September, saying his physician told him he should consider ending his career after the episode.

‘Gangsta’s Paradise’ rapper Coolio died at 59 from a heart attack in September 2022.

Singer-songwriter Jimmy Buffet postponed the remainder of his 2022 tour dates after a “brief hospitalization” for undisclosed health issues.

Edson Gomes was performing at Clube Cabo Branco when the guitarist, whose name was not disclosed, felt sick and fell on stage.

Post Malone was admitted to hospital after “having a very difficult time breathing” in September 20222.

Ballermann star Melanie Müller suffered a stroke in July. The right side of her face was then slightly paralyzed, and since then, she has had tinnitus in her right ear.

Metal group Electric Callboy was forced to postpone their entire live run across the U.K., Europe, and the United States due to health issues.

Comedian Raju Srivastava passed away in September after being on a ventilator since 10 August after he collapsed while running on a treadmill.

Lil Baby cited his body “completely shutting down” as the reason for canceling his headlining set at Vancouver’s BreakOut Festival over the weekend.

Two RAF musicians due to play at the procession at the Queen’s funeral collapsed and were treated by paramedics.

Arlo Parks canceled a number of her forthcoming U.S. tour dates to protect her mental health. “I am broken,” she said in a statement.

Sam Fender canceled a number of forthcoming shows and announced he is “taking some time off the road” to look after his mental health.

Wet Leg responded to their canceled tour dates in Denver and New Mexico by citing the need to focus on their collective mental health.

Dancer Yogesh Gupta died while performing dance in a Ganesh Puja event. He suffered a heart attack during the performance, fainted, and fell of the stage.

Dead Can Dance was finally set to start their long-delayed “A Celebration – Life and Works” tour this fall in Europe, with rescheduled North America shows to follow in spring 2023, but all dates have now been canceled due to “health reasons.”

The legendary Galician band Heredeiros da Crus, which planned to hold various concerts during the remainder of this month in Galicia, has been forced to cancel at least two of them due to sick leave of one of its members.

Frontman Dave Le’aupepe said, “I need to unf*ck my shit and get my body, voice, and mind in better working order.”

Russ announced that he is canceling the remainder of the European tour – His reasoning: “I feel like sh*t.”

Former Cradle of Filth guitarist Stuart Anstis, who played on the band’s Dusk and Her Embrace and Cruelty and the Beast albums, died at age 48 on 21 August.

Comedian Teddy Ray died at 32 in what authorities say was an apparent drowning: Comic was discovered by a maintenance worker at his home in Rancho Mirage, California.

Whitesnake bowed out of their summer 2022 North American tour with Scorpions due to bandleader David Coverdale’s ongoing health issues.

D-Roc had to be carried away after collapsing 30 minutes into the Ying Yang Twins’ set at a fair in Missouri.

Shawn Mendes canceled the rest of the ‘Wonderworld’ tour dates for health reasons.

Stefan Soltész collapsed and died during a performance at the Bavarian State Opera.

A couple of performers could be expected with their propensity for drug use. 53 that’s clearly the Clot Shot hard at work.

I’m not feeling so good myself

“Gee, I wonder if they were vaxxed ” , he said facetiously.

As he pulls up his sleeve to get vaxxed. INSANITY!

Puckery
Reply to  LIBERALS ARE SATANIC

Gee, ya think so?

It’s almost like there are thousands and thousands of entertainers.

There are probably millions of people worldwide killed by the Covid injections.
Stew Peters in the US is releasing a documentary soon on the masses killed by the CLOT-SHOT.

More like Fauci, the CDC, Dr. Brix et al. Trump was conned by those he thought were looking out for our best interests instead of Satan’s.

I got my suspicions;

Perla Batalla (former backup singer for Leonard Cohen) “postponed” all her concerts for health reasons 2 days after getting her 4th shot.

Wow. I know Perla. How sad. Did she complete the tour? I think she was in Europe.

Justin Bieber at 28 has face paralyzed after wife Hailey has “mini stroke”
https://www.showbiz411.com/2022/06/11/justin-bieber-face-paralyzed-after-wifes-mini-stroke-was-it-from-covid-and-lack-of-vax

Jennifer Gibson at 45 has Bell’s Palsey 2 weeks after clot shot. Face completely effed up and creates a cringe video basically saying it was the shot but she would do it again because “it’s what we have to do to see people” (ummmm… I see everyone and my face and DNA are still normal…)

Andrew Fletcher of Depeche Mode died suddenly. Erasure had to cancel they’re world tour due to a new cancer in Vince Clarke’s wife.

Exactly, That’s what’s puzzled me. Her photo but no mention.

Do we know how many of these folks were jabbed? I guess I can go through their social media but I honestly don’t have sympathy for these folks and prefer not to waste my time once again proving something for people who refuse to believe it.

Germany Bans Farmers from Fertilising Own Land to Serve EU 'Green Agenda'
Farmers in Germany have been banned from properly fertilizing large areas of their land under strict...
No posts found
wpDiscuz
23
0
What are your thoughts? Click to commentx
()
x
| Reply