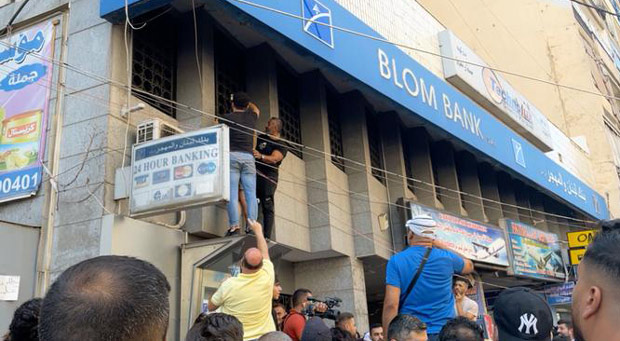 As the country’s dire financial situation worsens, banks across Lebanon are being raided by desperate citizens trying to reclaim their own savings.

As of Friday, there were five bank robberies in the country.

One person entered a bank armed with a hunting rifle in an attempt to withdraw frozen savings, a situation spurred on by restrictions on withdrawals due to the economic meltdown.

According to reports, a further seven banks were robbed in the past 48 hours.

One customer managed to take $19,000 from his own account after carrying a weapon into the bank.

The customer turned himself in to the police after giving the money to a family member.

Meanwhile, in the country’s capital Beirut, another man armed with a dummy pistol managed to withdraw $20,000 of his own cash from a bank.

Another man, Abed Soubra, who was also armed – entered a bank demanding access to his $300,000 in savings.

He eventually left the bank with his money, but authorities did not take him into custody.

A man in another part of Beirut, Jawad Sleem, entered a bank with a hunting rifle and demanded his deposit. He is a father of seven who has been jobless for months.

The Lebanese Banks Association has responded to the spate of incidents by closing all branches from 19 to 21 September.

Lebanon is currently experiencing the worst economic crisis in the country’s history, with almost three-quarters of the country’s population pushed into absolute poverty.

The economic meltdown comes on the heels of the COVID-19 pandemic and the 2020 ammonium nitrate explosion at Beirut’s port – one of the worst non-nuclear blasts in history.

As we reported earlier this week, one woman even resorted to using a toy gun to get her own money from a branch of BLOM bank in Beirut; she eventually with over $13,000.